What's New
A FOCUS on Mission
Must Patience Be So Slow?
Harold Jantz: A Heart for the Mennonite Story
Lorlie Barkman: A Life of Creative Engagement
Last Days, First Days
Women in Ministry: Bertha Dyck
January Moment in Prayer “Holy Spirit—Fill Us!”
The Church as the Patient Body of Christ
Advent: Making Much of Jesus: Christmas Day
Advent: Making Much of Jesus: Fourth Advent
Home Emilie Martens 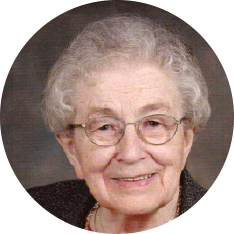 At 2, Emilie lost her birth mother Mathilda (Kliewer) Bartel. Emilie accepted Jesus as Saviour in her youth. During WWII, she spent a year at agricultural training school and working on a farm and in a supply kitchen. With the Russian army’s advance, she fled to Hamburg, Germany, losing contact with family. She corresponded with Friedrich, whom she had met in Wymyschle before he was sent to the Russian front. Reuniting in Hamburg, they married and welcomed daughter Trudy. Wartime conditions ruined Friedrich’s health; he died in 1947. Having received word her family was leaving for Canada, Emilie and Trudy sailed to Halifax, arriving in Mission, B.C., Dec. 2, 1948. Emilie worked as a domestic and studied English at night school, while Trudy lived in Arnold with her grandparents. Emilie also worked in a wire factory and hospital. By 1955, she saved enough for a house in Vancouver, where Trudy joined her. When Trudy moved to Kitimat, B.C., in 1970, Emilie was alone again. Life took a turn in 1971 when a widower contacted her; months later, they married. Emilie and John lived in Arnold until 1974, then in Abbotsford, where Emilie loved gardening and entertaining. They served as deacons. During John’s last 16 months, Emilie visited him at Menno Hospital almost daily. She enjoyed reading biographies, sewing for Helping Hands, and knitting. Emilie entered Tabor Court in 2009. She met challenges with grace and courage.