What's New
A FOCUS on Mission
Must Patience Be So Slow?
Harold Jantz: A Heart for the Mennonite Story
Lorlie Barkman: A Life of Creative Engagement
Last Days, First Days
Women in Ministry: Bertha Dyck
January Moment in Prayer “Holy Spirit—Fill Us!”
The Church as the Patient Body of Christ
Advent: Making Much of Jesus: Christmas Day
Advent: Making Much of Jesus: Fourth Advent
Home Elvira Sommer 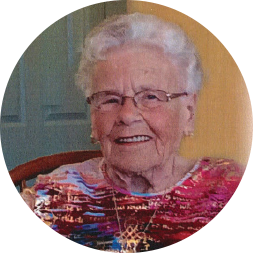 Elvira’s family farmed 10 years in Guernsey, Sask., then moved to Gretna, Man., to work at Mennonite Collegiate Institute. At 8, Elvira realized her need for a Saviour. Her mother led her in accepting Jesus’ forgiveness. When Elvira was 15, her family moved to Yarrow where she attended Elim Bible School and a year of sewing classes. The family bought a berry and chicken farm in Chilliwack, B.C. In Abbotsford, Elvira worked at a lamp and shade factory and a laundry service. After bookkeeping training at college in Chilliwack, she worked in the office for Langley Greenhouses, where she met Heintz. After marrying, they spent 4 years on Heintz’s family’s farm in Chilliwack, then bought their own farm in Rosedale where they found joy raising cows, pigs, chickens, and berries. Returning to Chilliwack in 1967, Elvira made draperies, then worked 16 years at fashion retailer Auld Philips. At Broadway MB Church, she served the Pioneer Girls, Sunday school, choir, and ladies group. After her children left home, she continued chasing her goals: at 53, Elvira earned her Grade 12 diploma, and at 62, learned to swim. Elvira and Heintz retired to Abbotsford in 1990. As Heintz’s memory loss increased, so too did Elvira’s caregiver role, one she fulfilled with great compassion and love. They moved into Tabor Court, Heintz into full care. In her last years, she looked forward to being with her Lord.