What's New
A FOCUS on Mission
Must Patience Be So Slow?
Harold Jantz: A Heart for the Mennonite Story
Lorlie Barkman: A Life of Creative Engagement
Last Days, First Days
Women in Ministry: Bertha Dyck
January Moment in Prayer “Holy Spirit—Fill Us!”
The Church as the Patient Body of Christ
Advent: Making Much of Jesus: Christmas Day
Advent: Making Much of Jesus: Fourth Advent
Home Elsa Tielmann 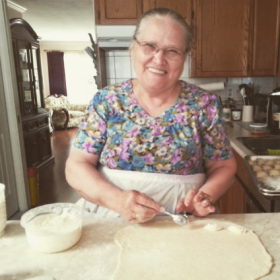 Elsa was born Nov. 4, 1939, in Neu Halbstadt, Sagradovka. When Elsa was 4, she, her parents, and 2 siblings fled their home during the German army’s attack on Russia. They were captured by the Russian army and sent to an exile camp in Altai, Siberia. Although their time in the camp was difficult, Elsa still said she had many fond memories. Her favourite was singing German hymns with her mother and father. After they were released in 1956, they moved to Nevyansk in the Ural Mountains. In 1957, Elsa met Peter while she was visiting family in another village. After writing letters for a short while, they became engaged in 1958. They married Jan. 1, 1959. They settled in Nevyansk, Russia, and welcomed twin boys. In 1962, they moved to Frunze, Kyrgyzstan. Here the family added 7 more children. Sadly, one son became very ill at 7 months and did not survive. In April 1974, with help from Peter’s brother Jake, the family immigrated to Canada, settling in Abbotsford, B.C. Here they welcomed 4 more children. Elsa and Peter got involved with their King Road MB Church and made many friends. Even though she had a full house of children, Elsa always had room for more. It wasn’t uncommon to have their own 12 kids and another 12 from the neighbourhood. Her home and table were always open to anyone who came in the door. Elsa greeted everyone with a smile, a hug, and something to eat. She was an amazing self-taught seamstress. She would sew dresses for her girls with just a picture from a magazine. She loved singing and poetry. Elsa had an incredible ability to recite lengthy poems from memory. Elsa went to be with her Lord and Saviour very suddenly, Jan. 3, 2021. Her family and friends mourn the loss of their mom, Oma, and friend but rejoice knowing she is reunited with Peter. Together they are celebrating with the Lord. Elsa loved Jesus and lived out her faith with the knowledge that heaven would be her reward.