What's New
A FOCUS on Mission
Must Patience Be So Slow?
Harold Jantz: A Heart for the Mennonite Story
Lorlie Barkman: A Life of Creative Engagement
Last Days, First Days
Women in Ministry: Bertha Dyck
January Moment in Prayer “Holy Spirit—Fill Us!”
The Church as the Patient Body of Christ
Advent: Making Much of Jesus: Christmas Day
Advent: Making Much of Jesus: Fourth Advent
Home Elsa (Elli) Hildegard Bublitz 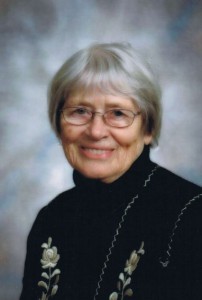 Elli’s father, a conscientious objector, was taken from the family for 7 years and enlisted for alternative duties. In poverty, deprivation and fear, her family sought God’s protection and built a strong family culture of love. Reunited after the war, but fearing repatriation to Russia where both parents were born, the family moved to Volendam, Paraguay, in 1948. The extreme climate, primitive conditions and physical labour shaped Elli’s teens. She was not able to continue her schooling. She doted on a little sister. Elli immigrated to Canada in 1957, where her parents had resettled two years earlier. She met Erwin at youth group. Elli was a stay-at-home mother and a generous host. She served her church through visitation ministry. After her children became independent, Elli achieved accreditation at Langara College as a childcare worker and began work. Known as “the Grandma,” she was dearly loved and respected by staff and children. Ellie and Erwin enjoyed travelling, skiing and biking. A hallmark of Elli’s caring was her homemade cards. Elli suffered a debilitating stroke. With Erwin’s care and God’s grace, she made a substantial recovery. After Erwin’s death to cancer, facing dementia, Elli received her sister’s care. Her last years were at Sunpointe Village, Kelowna, B.C., near her daughter. Elli’s kind, gentle spirit endeared her to all, and she lived her faith convincingly.