What's New
MWC Assembly small but full of joy
Bad back doesn’t hold back MDS volunteer
Transition in CCMBC National Faith and Life Leadership
Leading through the trauma of covid: Part three...
The church distracted: When the main thing is...
Remote wilderness rescue turns into service with MDS...
How open is your mind?
Following Jesus together across barriers
2022 National Faith & Life report to the...
CCMBC 2022 national assembly summary
Home Elizabeth Ewert 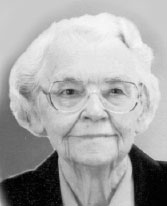 After the Russian Revolution, in 1924, Elizabeth’s family immigrated to Mexico, and in 1927, to a farm near Carroll, Man. In 1931, her mother died. Her father married Anna Kerber, with whom Elizabeth lived for the next 50 years. After her father’s death in 1943, Elizabeth and her mother moved to Winnipeg. Elizabeth was hardworking, adventuresome, cheerful, and hospitable. She worked 28 years as a nurse at Concordia Hospital, Winnipeg. With her brother Henry, she travelled the world. Elizabeth befriended neighbours and hosted family gatherings. (Relatives and friends knew they could stay for a night – or for months.) She retired in 1975 to care for her mother until her death in 1983. Elizabeth served as deacon at Elmwood MB Church, Winnipeg. Elizabeth enjoyed bus tours, pizza with friends, and Scrabble with her siblings.