What's New
Through the conflict, life carries on in Ukraine
A FOCUS on Mission
Must Patience Be So Slow?
Harold Jantz: A Heart for the Mennonite Story
Lorlie Barkman: A Life of Creative Engagement
Last Days, First Days
Women in Ministry: Bertha Dyck
January Moment in Prayer “Holy Spirit—Fill Us!”
The Church as the Patient Body of Christ
Advent: Making Much of Jesus: Christmas Day
Home Elizabeth (Betty) Thiessen 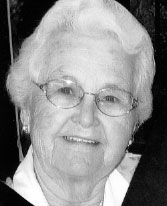 Betty grew up on a farm near Elbow, Sask. She enjoyed riding her horse to school. The Depression ended her schooling at Grade 8. She moved to Vancouver to sew for Pappas Furs and do housework for wealthy families. She had a successful business as a seamstress. Later, she demonstrated kitchen appliances at Hudson’s Bay Company. Betty was baptized by Jacob Thiessen, and later that year, married his son. Betty and Walter settled on a farm in Matsqui, B.C. In the flood of 1948, they lost almost everything and moved to Vancouver. They moved to Burnaby, B.C., in 1959, to Oliver, B.C., in 1983, and to Abbotsford, B.C., in 1991. Betty was a good homemaker who loved to make people feel welcome. She served Union Gospel Mission and Pacific Grace Mission and the boards of MCC and the Gleaners. With Disciple Making International, she went to Ukraine in 1996 and to Orenburg, Russia, in 1997, leading many to faith in Jesus. On a seniors’ day trip to Vancouver Island 6 years ago, Betty broke her hip; her health deteriorated. She had a stroke Jan. 24. Her prayer was for her family to love Jesus.