What's New
Through the conflict, life carries on in Ukraine
A FOCUS on Mission
Must Patience Be So Slow?
Harold Jantz: A Heart for the Mennonite Story
Lorlie Barkman: A Life of Creative Engagement
Last Days, First Days
Women in Ministry: Bertha Dyck
January Moment in Prayer “Holy Spirit—Fill Us!”
The Church as the Patient Body of Christ
Advent: Making Much of Jesus: Christmas Day
Home Elfrieda Korneyevna Friesen 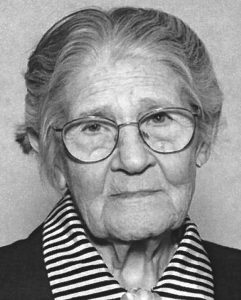 Frieda walked to school with her father, singing songs that sustained her faith until the end of life. Her parents’ prayer life made an early and strong impression. Her family stayed in a refugee camp in Neustadt, West Prussia, where Frieda accepted Jesus as Saviour. Her father was drafted in 1944 and didn’t see his family again for 28 years. The rest of the family fled from the advancing front, living in Saxony. Frieda copied songs and poems into a notebook that became her devotional during the difficult years. The family was sent to a collective farm in Siberia. Frieda worked as a bookkeeper. Frieda and Jacob’s faith was nurtured in the underground church in Tajikistan. Her father became established in Canada and worked 15 years to reunite the family. Frieda and Jacob arrived in Canada in 1972. Frieda translated immigration documents and taught German Saturday school. She led the Tabea Verein ladies’ circle and sang in the seniors’ choir. Frieda worked in housekeeping and the kitchen at Tabor Home, where her English skills grew. At 58, she began organ lessons. When she developed macular degeneration in 2006, the year Jacob moved into a care home, her faith was tested. She entered assisted living and relearned to knit. Frieda prayed daily for her family. She was eager to adapt and faced challenges with grace.