What's New
Through the conflict, life carries on in Ukraine
A FOCUS on Mission
Must Patience Be So Slow?
Harold Jantz: A Heart for the Mennonite Story
Lorlie Barkman: A Life of Creative Engagement
Last Days, First Days
Women in Ministry: Bertha Dyck
January Moment in Prayer “Holy Spirit—Fill Us!”
The Church as the Patient Body of Christ
Advent: Making Much of Jesus: Christmas Day
Home Elfrieda Duerksen 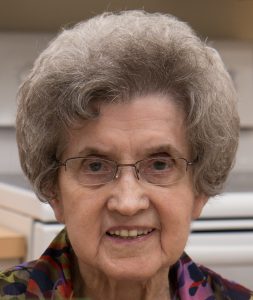 Elfrieda was born into a loving home. From her father, Elfrieda learned to delight at simple beauty. As the oldest, Elfrieda took on much responsibility during her mother’s extended illnesses. Elfrieda graduated as valedictorian from Mennonite Collegiate Institute, Gretna, Man., in 1943. Fulfilling a lifelong dream, she became a teacher and taught in the same two-room school with her father. David Duerksen, a young bachelor teacher, first saw Elfrieda at her graduation and predicted a future marriage. Ten years later, she received a letter from David indicating his interest as potential suitor. After some consideration on her part, she replied that there were possibilities. Many of their dates were at the hospital visiting her younger brother, Rudy; his death to cancer in his early 20s tested Elfrieda’s faith and remained a point of sadness in her life. Elfrieda and David raised 4 children in East Kildonan, Winnipeg. Elfrieda’s well-planned extended-family trips earned her the nickname “Mother Moses.” She was a proponent of good nutrition and warmed her family with memorable homemade chicken noodle soup and borscht. At River East MB Church, Elfrieda expressed her faith by serving in leadership in Morning out for Mothers and Pioneer Girls programs, participating in refugee sponsorship, and giving talks to various groups. Elfrieda was genuinely interested in people and their activities. At church, she maintained contact with individuals from all generations, encouraging wherever she could. Her encouragement also helped David through his darker days of depression. At 64, Elfrieda developed rheumatoid arthritis, which necessitated adjustments to her activities. Six months later, a stroke left David with weakness and difficulty speaking, writing, and swallowing. David was hospitalized for seven months and then returned home. In 1996, he broke his hip and moved to Bethania Personal Care Home, where Elfrieda became a daily fixture for the last 10 years of his life.  In 2016, she too moved to Bethania. When her understanding and communication became muddled, she took much comfort in a warm smile. Despite many losses, her grateful essence didn’t change. On her 95th birthday, she ended her last meal with “That was very good,” and shortly afterward slipped from consciousness. Following a few days of family goodbyes at her bedside, she took her last breath.