What's New
A FOCUS on Mission
Must Patience Be So Slow?
Harold Jantz: A Heart for the Mennonite Story
Lorlie Barkman: A Life of Creative Engagement
Last Days, First Days
Women in Ministry: Bertha Dyck
January Moment in Prayer “Holy Spirit—Fill Us!”
The Church as the Patient Body of Christ
Advent: Making Much of Jesus: Christmas Day
Advent: Making Much of Jesus: Fourth Advent
Home Edna Thiessen 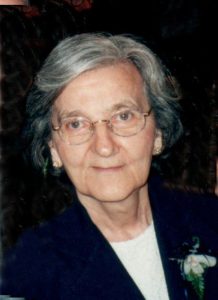 Edna attended Bible school in Abbotsford and Yarrow, B.C. After she married Henry Thiessen on May 31, 1952, they studied 4 years at Prairie Bible Institute, Three Hills, Alta., and graduated together on Apr. 12, 1957. While waiting for Indonesian visas, they worked with West Coast Children’s Mission, 1958-59, ministering to First Nation and Japanese communities in Port Edward, B.C. During their 23 years as missionaries in Borneo (Kalimantan Barat), Indonesia, Edna filled the roles of wife, mother, missionary, and teacher. She had great compassion for people’s health needs: she would distribute medicine at cost and often for free. Edna had a counsellor’s heart, sensitive to the emotional and spiritual needs of those around her. When they returned to Canada, in each community Henry pastored, Edna sought opportunities to serve. While being a pastor’s wife at Pemberton Christian Fellowship, 1984–91, Edna wrote for the Squamish newspaper. She took the St. John’s Ambulance Course and guarded at the local jail whenever they had a female inmate. She ran a bed and breakfast and started the Welcome Wagon to ease the transition for new people in town. In Armstrong, B.C., Edna launched North Okanagan Family Ministries, where she counselled women from 1990–93. Henry and Edna spent summers (1991, 1992, and 1993) as speakers and workers at Gardom Lake Bible Camp and Pines Bible Camp. While they were pastoring Sayward (B.C.) Christian Fellowship, May 1994–Apr. 1996, Edna organized and led a 12-Step Program for sexually abused women. After a few years of retirement, Henry and Edna accepted a pastorate at Boundary Community Church, Midway, B.C., 1998–2001. Here, Edna worked in the library to meet people. When they retired the second time, in spite of Edna’s Parkinson’s diagnosis, Henry and Edna returned to Borneo to visit some of the 17 churches they had started together. In 2011, they moved to Bradner Road, Abbotsford, B.C. Edna passed away quietly in her sleep Feb. 9, 2022.