What's New
Through the conflict, life carries on in Ukraine
A FOCUS on Mission
Must Patience Be So Slow?
Harold Jantz: A Heart for the Mennonite Story
Lorlie Barkman: A Life of Creative Engagement
Last Days, First Days
Women in Ministry: Bertha Dyck
January Moment in Prayer “Holy Spirit—Fill Us!”
The Church as the Patient Body of Christ
Advent: Making Much of Jesus: Christmas Day
Home Edith Lydia Ross 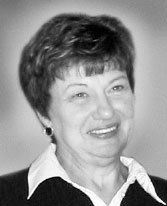 After a year of Bible school, Edith made lifelong friends at an MCC voluntary service unit in North Battleford, Sask., where she decided to train as a psychiatric nurse. She settled in Winnipeg, where she worked as an Air Canada flight attendant. Edith and her colleagues became a close-knit family. She strayed from church for a time, but rededicated her life to Christ and joined Home Street Mennonite Church, Winnipeg. In 1983, Edith and Ron moved to Surrey, B.C., and Edith flew out of Vancouver. The marriage dissolved, and Edith found supportive community at Cedar Hills Mennonite Church, Surrey. Edith used her nursing skills at Hazelmere Lodge part-time until her death. Edith’s joy was her daughter, Kaleigh Verna, born July 8, 1989. Through struggles, she and Kaleigh bonded through their mutual faith in Christ. When Kaleigh was 4, Edith and her sister Ruth bought a farm in Yarrow, where they grew hazelnuts and ran Hazelgreen Bed & Breakfast. Edith expressed her love of music by playing violin for family and singing in the Evensong and Symphony choirs.