What's New
Through the conflict, life carries on in Ukraine
A FOCUS on Mission
Must Patience Be So Slow?
Harold Jantz: A Heart for the Mennonite Story
Lorlie Barkman: A Life of Creative Engagement
Last Days, First Days
Women in Ministry: Bertha Dyck
January Moment in Prayer “Holy Spirit—Fill Us!”
The Church as the Patient Body of Christ
Advent: Making Much of Jesus: Christmas Day
Home David Levi Lepp 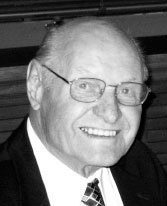 David’s family had 14 children from 3 mothers. The drought of 1919 made David the only “crop.” At Mountain Lake School, David picked up his teacher Henry P. Wiebe’s skills for music and handwriting. David thrived on music, learning to sing and read notes using the Sol-Fa system. Growing up in a lay preacher’s home, David felt convicted of sin at an early age. He asked God to save him as a teen, but kept the decision to himself. “I didn’t grow spiritually or have victory until Bible School where I took a firm stand,” he said. David loved dairy farming on his family’s homestead with Elma, the girl from down the road. Believing each person should give back to the community, David taught Sunday school and served on the school and nursing home boards. He passed on ancestral stories and moral lessons to his sons and nephews during pre-harvest machinery inspections. An avid reader, even in his last days, he read the Star Phoenix to keep up on events. David served the choir 1945–76, learning the songs while milking. At nearly 40, he learned saxophone for the Dalmeny Band, and at 90, directed his last choir at Bethany Manor’s Easter concert. His optimism was buoyed by his octogenarian romance with Helen, whom he cared for after her stroke. Whenever David felt alone, he’d “think of a song, and everything is alright.” Through storms and poor harvests, David held onto hope.