What's New
A FOCUS on Mission
Must Patience Be So Slow?
Harold Jantz: A Heart for the Mennonite Story
Lorlie Barkman: A Life of Creative Engagement
Last Days, First Days
Women in Ministry: Bertha Dyck
January Moment in Prayer “Holy Spirit—Fill Us!”
The Church as the Patient Body of Christ
Advent: Making Much of Jesus: Christmas Day
Advent: Making Much of Jesus: Fourth Advent
Home David Frank Thiessen 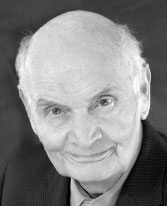 In his early teens, David followed his parents’ and siblings’ example of reliance on God by accepting Jesus as Saviour and being baptized. He studied at Mennonite Collegiate Institute, Gretna, Man. At 16, David lost his father. He earned his teaching certification and, at 18, became a teacher in northern Manitoba. He moved with his family to Niagara, Ont., where he met Elsie. He earned his BA in 1969. David became principal at Richmond Street Public School, Thorold, Ont., in 1960. In 1985, he retired to work with his brother, who was principal of Pan American Christian Academy, São Paulo , Brazil. David was committed to Grantham MB Church: leading music, singing in the choir, serving as Sunday school superintendent, deacon and elder. David and Elsie welcomed newcomers to church into their home and were generous with their children’s friends from all backgrounds. David coached children’s and adults’ softball teams and travelled the province cheering on his grandchildren’s activities. He was passionate about Camp Crossroads. David and Elsie spent several Januarys maintaining the camp and hosting winter retreats, and David worked summers as kitchen staff, entertaining campers in a wig as half of the rap duo Dave and Dave. David was content throughout his life.