What's New
A FOCUS on Mission
Must Patience Be So Slow?
Harold Jantz: A Heart for the Mennonite Story
Lorlie Barkman: A Life of Creative Engagement
Last Days, First Days
Women in Ministry: Bertha Dyck
January Moment in Prayer “Holy Spirit—Fill Us!”
The Church as the Patient Body of Christ
Advent: Making Much of Jesus: Christmas Day
Advent: Making Much of Jesus: Fourth Advent
Home Daisy Selma (Martens) Megli 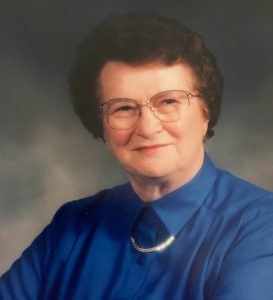 Daisy grew up on a farm in McMahon, Sask., the third of 6 children born to Peter and Helena Martens. She trained as a teacher, acquiring a PhD from Simon Fraser University in 1980. She taught school in Linden, Alta., Abbotsford, B.C., and at LCC International University in Lithuania, where she made many friends and found her second home. She also worked as a missionary high school teacher (through the MB Mission Board and Congo Inland Mission) for several years in the Belgian Congo (now DR Congo), for which she became fluent in French, studying in both Quebec and Belgium. In retirement, she loved travelling the world, and when at home, sewing. She was an active participant in a local book club and coffee group. Her mind was sharp to the very end. Daisy had many nieces and nephews who were very special to her. Her dear friend Dr. Sigute Mazonyte was at Daisy’s side during her final illness. Daisy’s faith was very important to her. Reflecting on her life, she left these words: “I am constantly aware of the abundant grace of God which saved me from a life of total selfishness to one in which I wished to honour him with whatever gifts and abilities he granted me.” Daisy died in Abbotsford, B.C.