What's New
Through the conflict, life carries on in Ukraine
A FOCUS on Mission
Must Patience Be So Slow?
Harold Jantz: A Heart for the Mennonite Story
Lorlie Barkman: A Life of Creative Engagement
Last Days, First Days
Women in Ministry: Bertha Dyck
January Moment in Prayer “Holy Spirit—Fill Us!”
The Church as the Patient Body of Christ
Advent: Making Much of Jesus: Christmas Day
Home Constance (Connie) Elaine Voth 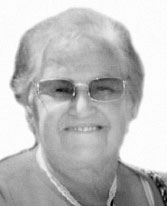 Connie grew up Solsgirth, Man. After moving to Saltcoats, Sask., in 1945, she was diagnosed with polio, from which she recovered fully. In 1955, Connie graduated from nursing school in Yorkton, Sask. Birch River Bible Camp changed her life: she found salvation through Jesus and a faith to guide her. She graduated from Winnipeg Bible College (now Providence University College) in 1965. Connie nursed in Morden and Manitou, Man., 1966–67. One pneumonia patient caught her eye and became her husband. After 5 years at home with 2 sons, she returned to work in 1975 at Notre Dame (Man.) Hospital, becoming director of nursing in 1980. When it grew demanding on the family, she worked part-time at Notre Dame, 1985–1997, and casually for 7 years at northern nursing stations. Connie started having respiratory problems in 2011. She treasured the role of grandma.