What's New
Multiply September Ukraine Updates
Volunteers in B.C. honour Leamington woman tragically killed...
Delete or not to delete, that is the...
Believers bring water for drought baptism
Encouragement to those in the arena
Keeping attention and making an impact: A few...
Open hands to reconciliation
From the editor
Approaching truth and reconciliation with love in our...
MB Seminary offers new MA in Transformational Leadership...
Home Clara Elsie Thiessen 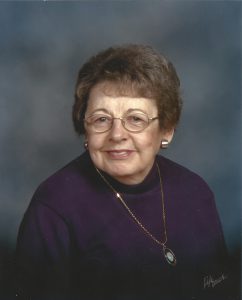 Clara was the third of 5 children. After elementary school in North Poplar and the Abbotsford Airport Barracks, she completed high school at Mennonite Educational Institute, Abbotsford, B.C., where she was class valedictorian in Grade 13. Clara started piano lessons at 5, continuing her studies under Menno Neufeld, winning the Muriel Erskine Trophy for the highest marks (85 percent) in her performer and teacher combined ARCT exam. Clara attended MB Bible Institute (now Columbia Bible College), Abbotsford, and MB Bible College, Winnipeg. She studied piano with Wanda Dyck and Marjorie Wiens. She accompanied the oratorio choir under Victor Martens, learning the entire Messiah and joining music festivals. Clara returned to MBBI to teach piano and theory and to work in the library. At Goshen College, she earned a BA in music. After studies at University of B.C., she again returned to MBBI where her greatest joy was accompanying the choir. A tour of Europe with the choir was her first international travel but not her last. Clara moved to Vancouver in 1978 where she worked as a library assistant for 20 years at Vancouver Community College. Clara had a strong faith. After coming to the Lord at 12, she was baptized at age 15 into Clearbrook MB Church, where she played piano for congregational singing and choirs and made lifelong friends. While living in Vancouver, Clara faithfully accompanied Killarney Park MB Church’s services and choirs. In 1980, Clara visited her sister Ruth’s family in Botswana, enjoying her first safari; she returned to Botswana in 2001 with sister Edith. Clara retired to Abbotsford, joining her 4 siblings and their spouses. She volunteered to take patients to appointments across the Fraser Valley and Vancouver. She also enjoyed volunteering for the Mennonite Historical Society. At the urging of nieces and nephews, she wrote a family history, “The John and Helena Thiessen Family Story,” published in 2010. Clara experienced many medical challenges, including scoliosis. She persevered, stubbornly living a long life. She had major back surgeries at 13 and again in 1984. When her health deteriorated, she moved to Tabor Manor and later Tabor Court, where she accompanied the choir. After 2 weeks in Abbotsford Regional Hospital, Clara died peacefully.