What's New
Through the conflict, life carries on in Ukraine
A FOCUS on Mission
Must Patience Be So Slow?
Harold Jantz: A Heart for the Mennonite Story
Lorlie Barkman: A Life of Creative Engagement
Last Days, First Days
Women in Ministry: Bertha Dyck
January Moment in Prayer “Holy Spirit—Fill Us!”
The Church as the Patient Body of Christ
Advent: Making Much of Jesus: Christmas Day
Home Carlin Eugene Weinhauer 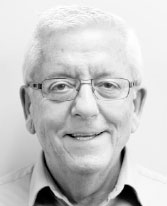 At a 1957 conference, Carlin gave his life to Christ with the commitment to serve anywhere, at any time, any cost. With Carlin’s lifelong interest in geography, God prepared him to minister far and wide. After a year at Buffalo (N.Y.) Bible Institute, he graduated from Briercrest College, Caronport, Sask., in 1962. Carlin married Marcia Watne, whom he met in Montana one summer during college. While Carlin earned a BA in biblical education from Columbia International University, S.C., Carlin and Marcia pastored Mt. Olivet Baptist Church, where he was ordained in 1964. They were invited to lead 3 rural American Sunday School Union churches in Montana in 1966. Carlin earned an MA in Christian Ed from Trinity Evangelical Divinity School, Chicago (1968–1974), an MA in pastoral theology from the Chicago Graduate School of Theology (1971) through summer studies and a PhD in educational administration from University of Alberta (1979). Carlin served Briercrest Bible College (1969–1983), teaching Bible and pastoral theology and serving in fundraising and recruitment. Carlin loved the church and mentored young pastors to preach the Word. In 1983, the family travelled to West Germany, Switzerland and Hungary with Word of Life Mission, the first of many ministry trips. Carlin and Marcia pastored Willingdon Church, Burnaby, B.C., with joy 1984–2004. Under their leadership, Willingdon planted a church among Chechen people in 1997. After retiring from Willingdon, Carlin joined MB Mission’s lead team in 2005, serving in mobilization and media. He led teams to Thailand and other MB mission fields, like Brazil, Burkina Faso and India. Carlin served with joy and a deep love for God’s work worldwide.