What's New
A FOCUS on Mission
Must Patience Be So Slow?
Harold Jantz: A Heart for the Mennonite Story
Lorlie Barkman: A Life of Creative Engagement
Last Days, First Days
Women in Ministry: Bertha Dyck
January Moment in Prayer “Holy Spirit—Fill Us!”
The Church as the Patient Body of Christ
Advent: Making Much of Jesus: Christmas Day
Advent: Making Much of Jesus: Fourth Advent
Home Betty (Enns) Klassen 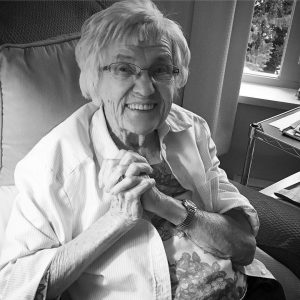 When Betty was 6 months, her family fled to Liverpool, England, boarding the SS Montrose for Canada Nov. 21, 1925, and arriving Nov. 29, 1925 in St. John’s, N.B. They settled in Coaldale, Alta.; Fraser Valley, B.C.; Black Creek, Vancouver Island; and finally, on Clearbrook Road (now part of Abbotsford Airport). Betty had little formal education. Summers, she picked strawberries and raspberries, and autumns, she picked hops with friends in the Sumas Prairie. She joined friends working at a fish-canning factory in New Westminster, B.C. South Abbotsford MB Church was central to her life. Betty met Herman while picking strawberries in Mission, B.C.; he joined South Abbotsford youth group and the friendship grew. They married when Betty was 20. A year later, they bought 67 acres in Aldergrove, B.C., with dreams of a dairy farm. Betty and Herman cleared the land using horses and sold Christmas trees for 15 cents each. They joined East Aldergrove MB Church, serving many years and making lifelong friends. After their third child was born, Herman built their growing family a new home with running water. In 1958, following a vehicle accident, their nearly 10-year-old son Jerry died; their faith in God and love for each other carried Betty and Herman through their grief. In the mid-1970s, they switched from milking cows to raising heifers, freeing them to visit grandchildren as far away as England. Herman’s death to cancer at 65 was a deep loss for Betty. Three years later, she moved into a suite at her daughter Marilyn’s home in Abbotsford, remaining 11 years. There, she joined the Dorcas Ladies group at Ross Road Community Church, volunteered at the MCC Thrift Store, and served at the lunch café of the Golden Age Society. At 77, Betty and her sister moved to a condo. When osteoporosis and hearing loss kept her home, she loved connecting with Clearbrook MB Church through their television ministry. At 90, she entered assisted Living at Tabor Court. Wonderfully curious and supportive of others, Betty gave her full attention to whomever she was with.