What's New
Through the conflict, life carries on in Ukraine
A FOCUS on Mission
Must Patience Be So Slow?
Harold Jantz: A Heart for the Mennonite Story
Lorlie Barkman: A Life of Creative Engagement
Last Days, First Days
Women in Ministry: Bertha Dyck
January Moment in Prayer “Holy Spirit—Fill Us!”
The Church as the Patient Body of Christ
Advent: Making Much of Jesus: Christmas Day
Home Betty (Betts) Kasdorf 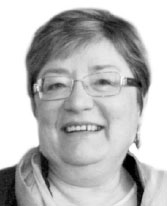 After high school at MB Collegiate Institute, Winnipeg, and 2 years at Winkler (Man.) Bible Institute, Betts spent a year in The Hague, the Netherlands, with an inter-Mennonite trainee program. She worked at Youth for Christ, Winnipeg, then at Winnipeg Bible College (now Providence University College). She studied home economics at University of Manitoba and earned an education degree in London, Ont. Betts taught adult education near Cambridge Bay, N.W.T., then taught high-school home economics in Beauval, Sask. She made lifelong friends as a teacher at Morden (Man.) Collegiate. Feeling a call to serve those in poverty, she worked for MCC in Bangladesh for 7 years. During her 5 years in Laos, she removed many undetonated cluster munitions and grenades from the Vietnam war. When her mother’s health began to fail, Betts returned to work for MCC’s Winnipeg office and care for her mother until her death in 2003. Betts worked with Canadian Foodgrains Bank and disaster relief. She enjoyed being in crowds. Betts was known for her hospitality.