What's New
Through the conflict, life carries on in Ukraine
A FOCUS on Mission
Must Patience Be So Slow?
Harold Jantz: A Heart for the Mennonite Story
Lorlie Barkman: A Life of Creative Engagement
Last Days, First Days
Women in Ministry: Bertha Dyck
January Moment in Prayer “Holy Spirit—Fill Us!”
The Church as the Patient Body of Christ
Advent: Making Much of Jesus: Christmas Day
Home Arnold Dyck 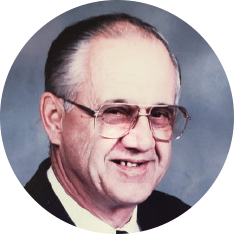 Arnold was raised on the farm, completing Grade 11 at the small district school. He enjoyed baseball, hockey, and camping. He accepted Jesus Christ as Saviour at an early age, and throughout his life, he was bold in proclaiming his faith. At Herbert (Sask.) Bible School, Arnold met and fell in love with Lory. They married and lived 6 years in Swift Current, Sask. When he secured a job at Lakeside Chrysler in 1964, they moved to Regina. He started a sales career at DeFehr Furniture in 1969, transferred to Saskatoon in 1975, and returned to Regina in 1986. He completed his career in Winnipeg with Palliser Furniture in 2000. Arnold viewed his job as a calling. Some of his fondest memories included the relationships he built with furniture store owners in Manitoba. In midlife, snowmobiling was a passion, and it became a family sport, later replaced by golfing and fishing. He loved playing with his grandchildren and great-grandchildren. Arnold served many years with the Saskatchewan branch of the Gideons; however, he found greatest pleasure leading in Christian Service Brigade, where he invested countless hours mentoring his sons and other young men of the church. Arnold was admitted June 21 for injuries from a fall and died in hospital following a heart attack.