What's New
Ask God which town
Where to from here?
CCMBC National Director attends 2022 ICOMB Summit
MCC Canada and MCC Manitoba sell shared property...
The world appears to be growing darker
Sharing a new and unified language
6 reasons to attend the MWC Global Assembly...
One too many
Just one more
A safe place in Winnipeg
Home Anni Klassen 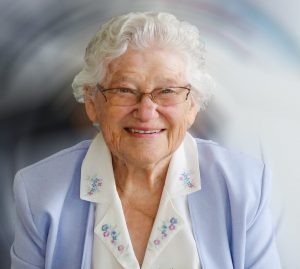 Anni and her four younger siblings grew up under the Communist regime in Ukraine. Owning a Bible and praying were forbidden, but their mother told them many Christian stories. When the German army arrived, the village was allowed to hold church services. At one prayer service in 1943, during the song “Wir Warten Auf Den Heiland Bis Er Kommt” (We Are Waiting on the Saviour until He Comes), Anni felt she wasn’t ready to meet the Saviour, and so she committed her life to the Lord. In September she was baptized and accepted into the MB congregation. Many in the villages suffered from hunger and, due to their German heritage, increasing unrest among their Russian neighbours. In October 1943, Anni’s family fled to Poland, and in January 1945, to Germany. Anni’s father was taken to the front and never seen again. Still in the Russian zone, they feared they’d be sent back, so Anni’s cousin Bernard Hamm arranged passage to West Germany, to the Mennonite Central Committee centre. While she was there, Anni met Heinrich and they married in Gronau, Germany, in 1947. Anni’s uncle Jacob Hamm was unable to bring Oma Hamm to Canada because of her illness, so Anni’s mother and siblings went to Canada while Anni, Heinrich, and Oma took passage with other Mennonites on The Heinzelman to Paraguay. There the couple welcomed two sons. In time, Oma was accepted into Canada. The family of four immigrated to Canada in 1953, reuniting with Anni’s mother and siblings in Arnold, B.C., praising and thanking the Lord. Anni and Heinrich welcomed a daughter and, after moving to Clearbrook, B.C., a son. In 1966, the family moved to Vancouver where Heinrich was working. Anni loved and participated fully in the life of the church at Arnold MB, Clearbrook MB, Vancouver MB, and Culloden MB, returning to Clearbrook MB for the last 30-plus years. She gave glory to God for his faithfulness. Anni died following a short season of cancer. She was known for her prayers, hospitality, baking, meals surrounded by family and friends, knitted and crocheted gifts, stories, and unswerving love.