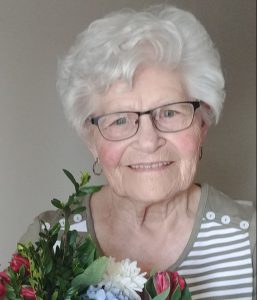 Anne was just sweet 16 in 1946 when she left rural Manitoba to begin the next phase of her life in Winnipeg. She found work in a sewing factory and reconnected with Jake, her soon-to-be husband. By the late 1950s, they had both become Christians and were actively engaged in their church as a family. At various times they served as deacons, taught new believers’ classes, participated in small groups, and served as greeters. Anne was busy ensuring the family was well-fed and clothed and the house spotless. And, as the grandchildren multiplied, she and Jake would travel to see them. As her children grew up, they left home – and Winnipeg. So, in 1997, she and Jake did the same. They settled in Abbotsford, B.C., near two of their children and grandchildren. A few years after Jake died in 2015, Anne moved to independent living at Menno Place. There she was able to make new friends and rely on the staff to help her manage her day-to-day activities. Anne spent her last 14 months at Maplewood House where she received excellent care. Anne was the eighth of eleven children, the longest living and last surviving of her siblings. In the closing paragraph of her Life Story and Testimony she wrote: “I will continue on my journey until Jesus comes to take me home.” Accomplished!