What's New
A FOCUS on Mission
Must Patience Be So Slow?
Harold Jantz: A Heart for the Mennonite Story
Lorlie Barkman: A Life of Creative Engagement
Last Days, First Days
Women in Ministry: Bertha Dyck
January Moment in Prayer “Holy Spirit—Fill Us!”
The Church as the Patient Body of Christ
Advent: Making Much of Jesus: Christmas Day
Advent: Making Much of Jesus: Fourth Advent
Home Anne (Friesen) Matthies 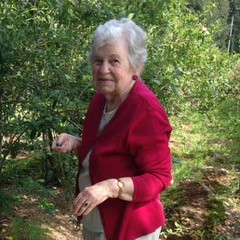 Annie was born in 1927 in Kronsgart/Plum Coulee, Man., to Johann B. and Anna Giesbrecht Wiebe Friesen, the youngest in the combined family of 8 children. They eventually made their way west and settled in Clearbrook in 1931– one of  the first families to homestead on Upper Maclure. Anne attended school at Dunach and North Poplar, leaving in Grade 7 to help at home. This didn’t stop her education, however. She was always an avid reader and lifelong learner. Anne was musically gifted and learned to play organ and piano at an early age. At 15, she became the first pianist at Clearbrook MB Church when they got their first piano. Over the years, she accompanied dozens of groups and choirs, and it was while playing piano for chapel at MBBS (now Columbia Bible College) in Abbotsford in the late 1940s where she met her future husband, George Matthies. George and Anne were married in 1950 in Clearbrook, B.C., but lived in George’s home community of Black Creek, B.C., until 1955. Charlotte was born while they were in Black Creek, and after the family moved to Vancouver, two sons, James and Jonathan, were born. There were lots of moves over the years, including to Williams Lake and Quesnel. George and Anne were committed to serving the church, wherever they lived. They also love camping, table games, weekly coffee with cousins, Sunday lunches at ABC, and travelling to Alberta to visit their children and grandchildren. Anne’s first love was music, and she was always involved – whether as church pianist and organist, wedding musician, ladies’ and community choir director, or accompanist at the local senior facilities’ hymn sings, or playing at home for her own enjoyment. In the early 1980s, Anne pursued her passion for natural health, and after years of studying, receiving many certificates and diplomas, she began her consulting practice in Clearbrook. This brought many lovely people into Anne’s life – many of whom became her close forever friends. After George’s death in 2012, Anne remained independent for a few years, but when it became clear that she needed more assistance, she moved to Calgary to live with her son Jon for a year. In 2018, she moved to a facility in Ponoka to be close to Charlotte. After suffering strokes, she was moved into a nursing home, where she resided for 2 years until her passing. Her energy and sense of humour are greatly missed.