What's New
Through the conflict, life carries on in Ukraine
A FOCUS on Mission
Must Patience Be So Slow?
Harold Jantz: A Heart for the Mennonite Story
Lorlie Barkman: A Life of Creative Engagement
Last Days, First Days
Women in Ministry: Bertha Dyck
January Moment in Prayer “Holy Spirit—Fill Us!”
The Church as the Patient Body of Christ
Advent: Making Much of Jesus: Christmas Day
Home Anna Teichrieb 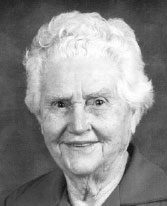 Anna’s family left Russia in 1929, and after 6 months in Germany, immigrated to Paraguay, settling first in the Chaco, then in Friesland in 1937. Anna’s father died in 1939, leaving her mother with 4 children. Anna found the Christian life to be good. She loved singing. Her greatest desire was to become a nurse. At 19, she returned to the Chaco for training. In the hospital, she took care of Jakob, a young blacksmith who became her husband. It was important to Anna that their marriage begin with prayer. Jakob and Anna were baptized into the MB church. 1 John 1:7 was important to them. In 1966, they immigrated to Vancouver. In 1978, Jakob was in an accident and had to retire early from the boat factory. Anna and Jakob build many boats, canoes, horse-drawn buggies and step ladders as a hobby. They praised God for the strength he gave for each day. Anna was gentle, patient and forgiving.