What's New
Through the conflict, life carries on in Ukraine
A FOCUS on Mission
Must Patience Be So Slow?
Harold Jantz: A Heart for the Mennonite Story
Lorlie Barkman: A Life of Creative Engagement
Last Days, First Days
Women in Ministry: Bertha Dyck
January Moment in Prayer “Holy Spirit—Fill Us!”
The Church as the Patient Body of Christ
Advent: Making Much of Jesus: Christmas Day
Home Ann Goerz 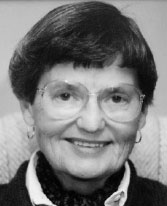 Ann’s mother died when Ann was 2, and she was raised by her Wiebe grandparents in Winnipeg. Ann and John moved to Kitchener, Ont., in 1950 and stayed 40 years. After raising 4 children, she found satisfying work as a bookkeeper and accountant at Gascho Motors for 15 years. Ann’s most fulfilling role and true calling was leading Bible studies for all ages. She had a lifelong love of music, books and art, and even studied English at University of Waterloo after she retired. Many people remember her years as a volunteer baker at Camp Crossroads. Ann moved to Tabor Home, St. Catharines, in 1992. She made numerous trips to her favorite spots: Niagara-on-the-Lake and the pier at Port Dalhousie. She found peace by the lake, both in solitude or with a friend. A highlight was making weekly prison visits until she no longer had the strength. November 2013, she moved to Rockwood Terrace, Durham, Ont., near family, and quickly made friends again. She wanted nothing more than to be home with Jesus.