What's New
Through the conflict, life carries on in Ukraine
A FOCUS on Mission
Must Patience Be So Slow?
Harold Jantz: A Heart for the Mennonite Story
Lorlie Barkman: A Life of Creative Engagement
Last Days, First Days
Women in Ministry: Bertha Dyck
January Moment in Prayer “Holy Spirit—Fill Us!”
The Church as the Patient Body of Christ
Advent: Making Much of Jesus: Christmas Day
Home Alyce Vera Hiebert 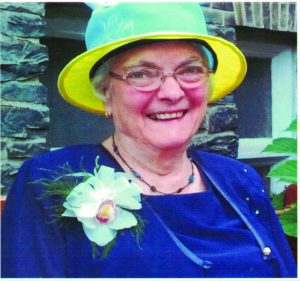 Alyce grew up in Winkler, Man., where she won first prize in a piano competition at 9. After the war, the family moved to Winnipeg while her father studied in Detroit. Her mother rented rooms to Bible college students and lasting friendships began, a notable friend being Katie Funk Wiebe. When her family moved to the Niagara region, Alyce met Victor at a youth event. She attended business college in Winnipeg while living with her grandparents Abraham and Tina Unruh. She did secretarial work at Kitchener Button Factory for 3 years before starting a family. In 1960, she and Victor helped launch a Sunday school at Brighton Public School, Waterloo, Ont., the forerunner to Waterloo MB Church. Alyce returned to work in the 1970s, first in the engineering department of University of Waterloo; later, at the Waterloo Regional Food Bank. She enjoyed singing in church and community choirs and a trio with Esther Regehr and Doris Redekop. In retirement, she and Victor travelled Europe and Russia, visiting their parents’ hometowns. In 2004, she coauthored The Unruh Ten Family Book with Peggy Unruh Regehr and Nicholas Dick. Her greatest joy was her grandchildren Gabriel and Isabelle. As Alzheimer’s disease took its toll, she moved into long-term care at The Village at University Gates, Waterloo, Ont., where she cared for everyone as the “mother” of the neighbourhood. She never lost her cheerful disposition. Alyce leaves a legacy of kindness. She will be remembered for her musical spirit, zany sense of humour, and disarming smile that flashed ever more readily as her cares slipped away.