What's New
A FOCUS on Mission
Must Patience Be So Slow?
Harold Jantz: A Heart for the Mennonite Story
Lorlie Barkman: A Life of Creative Engagement
Last Days, First Days
Women in Ministry: Bertha Dyck
January Moment in Prayer “Holy Spirit—Fill Us!”
The Church as the Patient Body of Christ
Advent: Making Much of Jesus: Christmas Day
Advent: Making Much of Jesus: Fourth Advent
Home Alma Wiebe 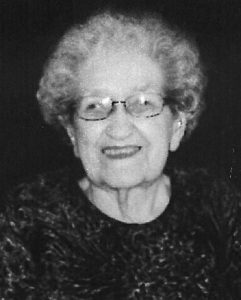 Alma was the youngest in a large family, and the last surviving sibling at the time of her death. Alma and her sister found seasonal employment for 5 years in a canning factory in St. Catharines, Ont., a province away from their home in Steinbach, Man. During this time, Alma enjoyed several bus tours. After Alma and Albert married, they lived in Winnipeg, followed by 14 years of farming in Roblin, Man. In Coaldale, Alta., Alma helped Albert establish a home construction company. Alma was known for her quiet, happy disposition. Her life centred around her love for her husband and children, and later, grandchildren and great-grandchildren. She enjoyed serving the church by being involved in “The Willing Helpers” for many years and singing in the choir. She also loved to volunteer at the MCC Thrift Shop and take part in groups that sang at seniors’ lodges. Her interests included knitting and playing shuffleboard. In later years, Alma suffered health problems, including arthritis, that caused her much discomfort. Even as her health declined, her positive outlook and sense of humour shone through. Pain or no pain, her constant smile was contagious, and her care providers described her as a model resident. Alma died peacefully at St. Michaels Health Centre in Lethbridge, Alta.