What's New
Abortion, the image of God, and faithful witness...
Choosing motherhood: The sacrifice of honouring life
MWC Assembly small but full of joy
Bad back doesn’t hold back MDS volunteer
Transition in CCMBC National Faith and Life Leadership
Leading through the trauma of covid: Part three...
The church distracted: When the main thing is...
Remote wilderness rescue turns into service with MDS...
How open is your mind?
Following Jesus together across barriers
Home Albert Norman Peters 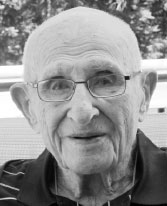 Before being sent as a conscientious objector to Banff National Park, B.C., in 1941, Albert met Lillian, but they waited till the war ended to marry. Albert did his basic training in Calgary in 1942, and spent the next 3 years in the army service core, trucking supplies, meeting trains, and taxiing officers to the prisoner of war camps around Jasper, B.C. He spent 2 years at a chemical warfare station, CFB Suffield, near Medicine Hat, Alta. Albert became Saskatchewan Wheat Pool manager in Hepburn, Sask., in 1948 and worked there with joy for 33 years. Albert said something was missing in his life until October 1957, when he rededicated his life to the Lord at a Waldo Wiebe Crusade, and he and Lillian joined Hepburn MB Church. Albert worked in the church as usher, board member, and faithful financial supporter. He also served his community through senior housing, town council, Mennonite Disaster Relief, and the Zelma, Sask., food bank. Albert loved cars. Albert and Lillian enjoyed many happy retirement years, travelling and gardening.