What's New
A FOCUS on Mission
Must Patience Be So Slow?
Harold Jantz: A Heart for the Mennonite Story
Lorlie Barkman: A Life of Creative Engagement
Last Days, First Days
Women in Ministry: Bertha Dyck
January Moment in Prayer “Holy Spirit—Fill Us!”
The Church as the Patient Body of Christ
Advent: Making Much of Jesus: Christmas Day
Advent: Making Much of Jesus: Fourth Advent
Home Albert Falk 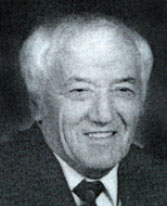 Albert’s family immigrated to Herbert, Sask., in 1925. During the war, he stayed home to work the farm and returned to complete Grade 12 in 1947. Albert and Nettie raised 5 children a few miles from his parents’ farm. In 1980, they moved into Herbert, where Albert worked as administrator of the Herbert Senior Home 8 years. Albert volunteered on many committees and boards. He learned about God from his parents and grew in faith. He realized his relationship with God was more about God’s love for him than what he could do for God: “When I stand before God, it is only by God’s grace that I stand there at all.”