What's New
Through the conflict, life carries on in Ukraine
A FOCUS on Mission
Must Patience Be So Slow?
Harold Jantz: A Heart for the Mennonite Story
Lorlie Barkman: A Life of Creative Engagement
Last Days, First Days
Women in Ministry: Bertha Dyck
January Moment in Prayer “Holy Spirit—Fill Us!”
The Church as the Patient Body of Christ
Advent: Making Much of Jesus: Christmas Day
Home Agatha Rosalind Olfert 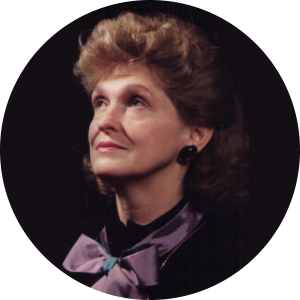 The daughter of an MB preacher, Agatha grew up in St. Catharines, Ont., and Yarrow and Vancouver, B.C., before moving to Manitoba, where she met and married George. With her beautiful soprano voice, she sang in church choirs in her youth and in the Gospel Light Hour choir while attending Elmwood MB Church and raising her family in Winnipeg. After her youngest’s birth, she had closed heart surgery. She moved her family to the warmer climate of Nanaimo in 1967. Having been unable to complete high school in her youth, once her family was grown, Agatha enrolled in post-secondary studies at Malaspina College. By 1981, she had an associateship in arts and science. Agatha was always a visual artist. Her sketches appeared in the MB Herald in the 1960s and 70s. From her early pen and ink and charcoal sketches, her artwork evolved through oil and acrylic portraiture to ink painting, her style from realism to abstract. She gave her first solo art show in 1989 at Nanaimo Art Gallery and Exhibition Centre, won recognition at several juried art shows, and exhibited in galleries across southern Vancouver Island. Her desire was to move viewers emotionally and spiritually. After a debilitating stroke in 1999, unable to continue her work as before, Agatha retired to Duncan, B.C. Despite numerous medical crises, Agatha was a survivor. Throughout her health problems, she clung to her faith in God.