What's New
A FOCUS on Mission
Must Patience Be So Slow?
Harold Jantz: A Heart for the Mennonite Story
Lorlie Barkman: A Life of Creative Engagement
Last Days, First Days
Women in Ministry: Bertha Dyck
January Moment in Prayer “Holy Spirit—Fill Us!”
The Church as the Patient Body of Christ
Advent: Making Much of Jesus: Christmas Day
Advent: Making Much of Jesus: Fourth Advent
Home Abram Wiens 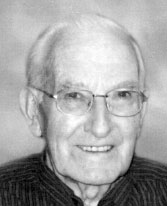 Abe said his “second birthday” was when he accepted Christ in July 1944 and was baptized. He attended Bible school in Coaldale, Alta. Abe and Helena farmed first in Coaldale, where Abe lost several fingers, and then for 37 years in Lomond, Alta., where their 2 oldest sons Abram and Peter drowned in another farming accident. This was a hard blow, but still Abe and Helena were convinced farming was God’s choice for them. Abe always had time for service to God. In 1983, Abe asked himself, would the farm control him or was God the Lord of his life? and chose, in his 50s, to attended MB Bible College. After retiring to Coaldale in 1994, Abe and Helena served the Gideons. They took in numerous foster children, one of whom they adopted. Abe was compassionate and generous.