What's New
MWC Assembly small but full of joy
Bad back doesn’t hold back MDS volunteer
Transition in CCMBC National Faith and Life Leadership
Leading through the trauma of covid: Part three...
The church distracted: When the main thing is...
Remote wilderness rescue turns into service with MDS...
How open is your mind?
Following Jesus together across barriers
2022 National Faith & Life report to the...
CCMBC 2022 national assembly summary
Home Abram Froese 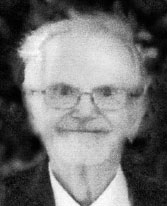 Abe’s family immigrated to Canada when he was 7, settling in Tofield, Alta., where times were tough. Abe left home at 14 to find work. He attended Coaldale (Alta.) Bible School and Winkler (Man.) Bible Institute. In the 1940s, Abe moved to Ontario, where he met Hertha, and built houses in St. Catharines and Sudbury. In 1966, he turned to commercial construction in St. Catharines; Tabor Manor, Pleasant Manor, and Scott Street MB Church are among his work. In the 1960s, Abe began 31 years of volunteering with Mennonite Disaster Service, beginning with the bombed houses in Mississippi. A stroke in 1992 ended his MDS service, but not his golfing. On retiring, Abe made trivets, benches, and games, most of which he gave away. After moving to Tabor Apartments in 2007, he switched his focus to caring for Hertha and cheering on his grandchildren’s activities. He was dedicated to his church community.