What's New
Delete or not to delete, that is the...
Believers bring water for drought baptism
Encouragement to those in the arena
Keeping attention and making an impact: A few...
Open hands to reconciliation
From the editor
Approaching truth and reconciliation with love in our...
MB Seminary offers new MA in Transformational Leadership...
Multiply August Ukraine Updates
Book Review of Return Stroke: Essays & Memoir...
Home Arts & Culture “Whole-wheat” commentary reads against the grain 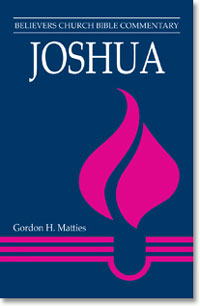 When it comes to bread options in the grocery mega-store, there are air-filled white and slightly off-white breads advertised with balloons on the packages, and then there are multigrain, seven-grain, organic, and specialty breads that speak of substance and effort. It’s the same with commentaries on Joshua: some are of the white-bread genre (that I regret ever buying), but others I look at often because they have depth and something to say on each text unit. Gordon Matties’ work on Joshua immediately jumps into the multigrain, organic, and substance category.
Matties is well qualified for this challenging project – an Anabaptist reading of the book of Joshua – because of his 28-year academic career at MBBC/Concord College/Canadian Mennonite University. It seems he has committed a large portion of his academic thinking and work over the past decade and more to this project. His eclectic mix of expertise in Old Testament literary theory, Anabaptism, Middle East conflict, and contemporary film makes the commentary instantly stand apart.

Some commentaries seem content to repeat the text and/or include a few sermonic illustrations to help apply the text to the modern world. Matties provides some of the most comprehensive literary and theological work available in any Joshua commentary. He details (quite exhaustively) how particular expressions and themes are used elsewhere in the Bible.

But be warned – there is nothing light and fluffy here. It is multigrain, organic-grown, and high in vitamins and fibre. After dealing with all these motifs, Matties moves to how the text has been appropriated for life by Christians throughout history, especially by early Christian thinkers like Origen.

In addition to all this scholarly effort and attention to detail, Matties does not merely walk well-worn paths where most other commentaries have already trod. Right from the introduction, it’s clear he is going to ask difficult questions and respond in new ways (at least new ways for many MB church attendees). There are numerous times when readers will feel a need to stop and reflect about where Matties is going.

He writes carefully, but only rarely pauses to explain the implications of his hermeneutical methodology. After some 384 pages of text exposition, there are another 80 pages of carefully written essays (in an even smaller font) about such topics as the composition of Joshua, difficult conversations, and genocide and sacred violence.

Scholars seem to fall into two categories in their treatment of the book of Joshua. The first group reads it (switching to a wood metaphor) “with the grain,” trying to resolve the text’s historical tensions with archaeological research and especially its theological tensions with the larger biblical portrayal of a forgiving, loving, and merciful God.

The second group (presently growing) reads it “against the grain,” feeling at liberty to disagree and challenge both the book’s historical portrait and, more importantly, its theological portrait. These scholars would argue that the killing or attempted extermination of an indigenous population, and/or its displacement can never be justified theologically. The tension between this picture and that of the New Testament cannot be explained away by any means other than confrontation. Lastly, they would argue that conventional reading (“with the grain”) has led various groups throughout history and into the present to abuse these texts.

Matties’ work here fits squarely in the second group, as he makes no attempt to suggest that the violence in the book is somehow justified or can be explained away. While he argues that the book of Joshua is “not a conquest narrative” and that the text emphasizes how the taking of the land was not Israel’s but God’s work, there is still much horrific violence in the book that the biblical writer portrays as being divinely sanctioned.

Here, Matties’ methodology comes in. He reads the text as a literary creation of a school of scribes writing much later than the events described (think Deuteronomist in the exilic period) that reflects the worldview common at that time. Thus, the book of Joshua reflects a culture where people wrote about how they “killed everything that breathed” (obviously hyperbolic) and people described military triumphs by explaining that their deity gave them this victory.

One gets the impression that since this is the common view of ancient writers, we do not therefore need to accept this story as having much historical veracity, or as a competent voice on what God actually said at that time. This is “theological warfare rhetoric” that is in a “conversation” with other biblical perspectives which challenge it and even disagree with it – and so Matties invites us to this same sort of conversation. Ultimately, as Anabaptists, we can read the book “against the grain” and stand with other scriptural conversation partners on the issue of whether violence is ever sanctioned by God.

Matties utilizes what he calls a “metaphorical, figural, and conversational hermeneutic that is open and responsive to intrabiblical allusion and conversation among all texts and across all times.” In a sense, he moves in the direction of looking at the trajectory of these themes throughout the entire Bible and beyond – and concludes that they point toward Jesus’ victory over the powers, and ultimately the eschatological victory over all evil. How much one tracks with Matties will depend upon one’s acceptance of the assumptions behind his hermeneutical method.

It’s hard to do anything close to justice in this short review of a commentary that reflects such effort and scholarship. Matties’ contribution is an amazing gift in terms of the studies of words, themes, and motifs in the book of Joshua. However, many “Sunday school teachers, members of Bible study groups, students, pastors, and others” for whom the series is addressed will find its complexity and its hermeneutical methodology challenging and, at times, troubling.