What's New
A matter of love: Reframing abortion
“Any chance you might be expecting a goldfish?”
Abortion, the image of God, and faithful witness...
Choosing motherhood: The sacrifice of honouring life
MWC Assembly small but full of joy
Bad back doesn’t hold back MDS volunteer
Transition in CCMBC National Faith and Life Leadership
Leading through the trauma of covid: Part three...
The church distracted: When the main thing is...
Remote wilderness rescue turns into service with MDS...
Home Arts & Culture Taking mental illness mainstream 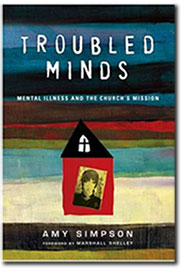 The book’s purpose is to foster openness to talk about mental suffering – still a taboo subject in contradiction to increasing acceptance of self-disclosure on nearly any other problem in a person’s life. Troubled Minds is intended to encourage those who minister among mental illness by leading support groups in their churches (and to inspire more to do the same). Simpson wishes to demonstrate to those with mental illness that they are not alone, that they will be loved as much after sharing their story with someone who cares, and that God has not turned his back on them. Finally, the author’s purpose is to spread hope that the treatment of mental illness will improve, especially in the church.

For the non-medical reader, Simpson provides a helpful overview of mental illnesses most commonly encountered, an exhaustive list of (primarily negative) coping mechanisms of affected people, and guideposts for navigating the mental health system.

Simpson distinguishes between short-term illnesses (mild depression and anxiety) and acute or chronic illnesses (clinical depression, acute anxiety, schizophrenia, bipolar disorder, post-traumatic stress disorder, and borderline personality disorder). She rightfully declares that these illnesses are no different than the so-called physical illnesses we suffer, except that they originate in the brain, often caused by chemical imbalance.

Asserting that mental illness shouldn’t be viewed differently than, say, heart disease, cancer, HIV/AIDS, and diabetes, Simpson nevertheless claims, “These diseases are serious, life-threatening, and grief inducing. They provide clear evidence of humanity’s Great Fall, with its consequences of decay and inevitable death.” I find this claim troublesome, as it too easily provides a faulty basis for a theology suggesting all illness results from a lack of faith, a weak prayer life, or hidden sin. Simpson provides anecdotal information where such views are still held, unfortunately preventing proper clinical care, in cases of physical but more often mental illnesses.

Simpson identifies common themes that churches struggle with (e.g., denial [pretending everything is fine because Christians don’t suffer], condemnation, impatience, silence), resulting in minimal forward movement. She then provides an impressive list of suggestions of ways churches can serve those who are mentally ill. The general wisdom is that the most effective response to addressing mental illness consists of 1) professionally prescribed medication, 2) psychotherapy (which could include competent clinical counselling), and 3) a support network.

The latter is the area in which the church can be most helpful. Support groups are characterized by an environment of safety, acceptance, and understanding. The group facilitators need to exercise patience, not abandoning those who are suffering if progress is not immediately obvious.

Parishioners may be more willing to tell their pastors about their mental illness than in years past; however, they still express guilt about taking medication, wondering if their suffering results from spiritual weakness or deficiency, Simpson writes.

Her survey indicates that mental illness has gone mainstream, yet for the most part, the response of pastors and church leaders is at best token: after referral to a mental health clinic or professional, they feel they have done their part. (A bias that I detected is that the author appears to favour referrals to counsellors or professionals who are Christian, suggesting that the helper’s faith being similar to ours is more important than his or her professional competency.)

Simpson makes a plea for the church to formulate its mission toward those who are mentally ill based on the example of Christ who came to serve “the least of these” (Matthew 25:45), and to minister to the sick, not those who don’t need a physician (Matthew 9:12). She cites the example of Quakers and Mennonites serving in Mental Hospitals as conscientious objectors during the World War II [link https://mbherald.com/mennonite-madness-examined/], resulting in a vision that developed in the decades following into widespread services.

Simpson earned an MBA from University of Colorado and is currently editor of GiftedForLeadership.com and managing editor of marriage and parenting resources for Today’s Christian Woman. Formerly vice president, publisher, editor, and director of the church ministry media group at Christianity Today, she is also the author of Into the Word: How to Get the Most from Your Bible. A broad survey of church leaders, along with her personal observation and experience of mental illness in both her parents provided the motivation to write this book.

The author’s mother’s diagnosis with schizophrenia when Simpson and her siblings were teenagers affected each member of the family. Simpson’s father, a pastor, was often unemployed or underemployed, especially after his wife’s diagnosis, and he suffered with depression. Simpson’s brother, who left home left home shortly before his mother’s diagnosis, felt a lot of guilt for not being present to help the family. The three daughters coped with mother’s illness in different ways: the oldest “shut down emotionally” to survive; middle daughter Simpson felt an overwhelming sense of responsibility which exploded into guilt, whereas the youngest tried to “fix Mom.” The schizophrenia was difficult to treat, and sometimes their mother would fail to take her medication, making things worse. At one point she left home, lived on the street, and ended up in prison for a minor misdemeanor. On release from prison, she was admitted to a state mental hospital. Her recovery over time is a story of endurance and hope.

The book ends with numerous redemption stories, and offers a blessing for the church that there is hope for a better future in caring for those with mental illness within the church and in society generally.

—John Konrad’s nearly four-decade career involved serving the B.C. government in criminal justice, ending with an assignment as special advisor to the B.C. forensic psychiatric commission. An active member of Highland Community (MB) Church since its inception in 1975, he co-facilitated the congregation’s “Living Room”[link:www.livingroomsupport.org]-model support group for people with mood disorders (depression, anxiety, and bipolar).