What's New
A FOCUS on Mission
Must Patience Be So Slow?
Harold Jantz: A Heart for the Mennonite Story
Lorlie Barkman: A Life of Creative Engagement
Last Days, First Days
Women in Ministry: Bertha Dyck
January Moment in Prayer “Holy Spirit—Fill Us!”
The Church as the Patient Body of Christ
Advent: Making Much of Jesus: Christmas Day
Advent: Making Much of Jesus: Fourth Advent
Home PeopleAppointments November Transitions 2014 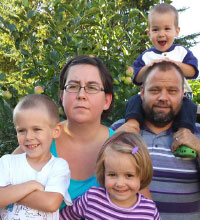 Andy J. Funk began his ministry at Selkirk (Man.) Community Church May 27, 2014, as lead pastor. He graduated with a BTh from Canadian Mennonite University, Winnipeg, in 2014 and is currently enrolled in the MA in theological studies at CMU. Andy was associate pastor at Morrow Gospel Church, Winnipeg, 2010–2013. He and Patricia have 3 children: Caleb, Piper, Malachi. 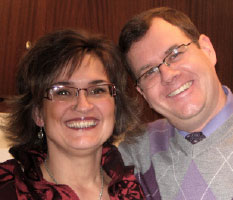 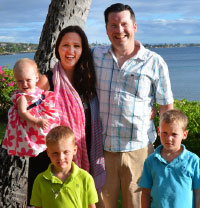 Tim and Michelle Thiessen joined Parliament as associate pastors. Tim serves full-time in the areas of young adults, family ministries and outreach. With a BA in youth work from Columbia Bible College, Abbotsford, B.C., and an MA in youth and family ministry from Briercrest Seminary, Caronport, Sask., he has previously served at Circle Drive Alliance, Saskatoon; SunWest Christian Fellowship, Calgary; Erindale Alliance, Saskatoon; Forest Grove Community Church, Saskatoon. Michelle has a background in teaching and will be serving part-time in children’s ministry. Tim and Michelle have 3 children: Ty, Hudson, Eva.

Ben Wohlgemut joined Mennonite Brethren Biblical Seminary Canada Oct. 15 as advancement officer for Saskatchewan, Manitoba and Ontario. A graduate of MBBS-Fresno, Ben served as associate pastor at River East MB Church, Winnipeg, and for 18 years occupied teaching and administrative roles at Bethany College, Hepburn, Sask. For 6 years he served as the administrator of Tabor Home in St. Catharines, Ont, and for the past 7 years, Ben has been the CCMBC stewardship representative for Ontario.

Tyler and Cheryl Schulz began a 5-year term of capacity building with MB Mission in Burundi and DR Congo in July 2014. Tyler has his CPA CGA designation and Cheryl is an RN. They both attended Capernwray Bible schools. Tyler interned with their home church Central Community Church, Chilliwack, B.C., January–June 2014. Tyler and Cheryl have 3 daughters: Natalie, Jillian, Lauren.

A well-known MB missionary, author and lecturer has resigned as MB Mission’s lead team global program director. Ray Harms-Wiebe spent 6 years in international headquarters ministry after serving as a missionary in Brazil for 18 years. Currently, Ray is pursuing further studies and working on writing projects for MB Mission, including Our Journey to Glory, a church planting manual outlining MB Mission’s approach to engage the least reached with the kingdom.

Missio Dei Church (formerly Summerside Community Church), Edmonton, has closed. It was planted in January 2000 with a vision of winning people to Christ in the city’s southeast. The church was known for doing Saturday night church with a relaxed atmosphere and upbeat music, rather than holding traditional Sunday services. The church’s Quest hip hop dance team performed across Western Canada, including at Youth Conference in Edmonton and at National Youth Conference in Calgary. Mission teams served in both Mexico and Thailand, constructing homes and church buildings. Ray Wiens served as lead pastor from 2000 to 2007. Following an extended period without a pastor, Tom Koop was called, and served from July 2009 until Apr. 30, 2014. Over the last season of its life, Summerside experienced, and was unable to resolve, some challenges regarding how to move the church forward as well as differences in leadership style. A decline in attendance and finances led the congregation to make the decision to close in July 2014, grateful to the Lord for the many good things he accomplished and the many conversions and baptisms over the past 14 years.

Pastor Ray Wiens was the most excellent pastor. He has great discernment and is firm and driven in the Spirit. I wonder if the reason the church was without a pastor for two years wasn’t because he had to leave. I was baptized in the Mennonite Brethren Church and I quit attending when Pastor Wiens was forced to resign. As I understood it, his ways of worship i.e. in dance, song, drama etc. were too liberal? Or too advanced somehow? I presume the elders disapproved of such open spirited blessings. I often felt convicted and emotionally charged with joy at his sermons. His family are lovely. He is honest and forthright and faithful. I am sorry to hear of this dreadful regression. I’ll pray for truth and vision and humility and joy and hope – that will NOT disappoint. God’s Word does not return to him empty. I wonder if the painting by Leah VanBodegom of “God Breathed” still hangs in the church. Blessings in Christ.