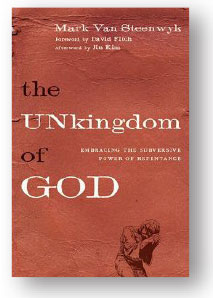 The Unkingdom of God: Embracing the Subversive Power of Repentance

Is it possible the church in North America has gotten off track and embraced “the American dream” with more fervour and abandon than the message, ethic, and mission of Jesus outlined in the New Testament?

Is it possible the Jesus we follow more clearly reflects our North American ideals of security, prosperity, power, and control than the Jesus of the New Testament?

Mark Van Steenwyk thinks so. We have painted Jesus in our own likeness, he suggests. As a result, the church in North America is carrying baggage that hinders us from truly being like Jesus.

Van Steenwyk – writer, speaker, activist, and cofounder of an Anabaptist intentional community in Minneapolis called the Mennonite Worker – describes the early days of his journey as a believer in Jesus as a season of discovering a radical new way of life, with different economic, social, political, and moral principles than commonly lived out among his fellow Minnesotans. It didn’t take long, however, for his “nascent radicalism to be extinguished” by the church.

“With my fledgling radicalism exorcised, I began to see the gospel as the animating force of the American dream,” he writes. “God loved me and had a wonderful, America-shaped plan for my life. The Bible was a guidebook for good, clean living.”

Challenge to idea of empire

Van Steenwyk now identifies himself as a “Christian anarchist.” For him, this self-identification expresses the idea that God’s kingdom is distinct from governments in this world. Rather than imperialistic rulership, Jesus’ kingship is an entirely different sort: “so counter to earthly authority that it is, in fact, an unauthority.” Van Steenwyk suggests the basic principles of anarchism – self-organization, voluntary association, mutual aid – reflect Jesus’ kingdom more fully than the power and control of earthly rulers.

I’m not a Christian anarchist, so as I interact with Van Steenwyk’s work, I experience some internal tension. But this tension leads to a broadened perspective and a deeper evaluation of my own faith expression within the context of the North American church.

In The Unkingdom of God, Van Steenwyk adeptly identifies several big issues for Christianity in North America, and calls us to repentance. His overarching critique is that the church of Jesus Christ has, in effect, created an empire that reflects the realities of many political realms. “Our proximity to power and affluence gives us a strange perspective from which to read the gospel,” Van Steenwyk says. He suggests our entire way of life depends on the maintenance of security, prosperity, domination and control – yet these things are contrary to the life and teachings of Jesus. “We find ourselves trying to justify our way of life while worshiping One who challenges our way of life.”

This book is a call to repentance.

Van Steenwyk challenges us to “repent of this thing we call Christianity and seek to follow Jesus.” Citing personal experiences with intentional community, social activism, hospitality, compassion, and some key communal and individual spiritual practices, Van Steenwyk offers suggestions on how to repent and move in the opposite direction of Christian imperialism. One way is to simply pay attention “to what is happening in front of us… Wherever humanity is, there is an opportunity for compassion. Compassion begins with paying attention…. Attention is the rarest and purest form of generosity.”

Van Steenwyk’s suggestions of how to live with a posture of repentance are helpful. He advocates for “a reimagining of what obedience looks like.”

This is not a feel-good story, nor a particularly easy read (especially for an optimist like myself). However, it asks important questions we in the North American church should spend some time considering.

Van Steenwyk calls us to look carefully at the person and ethic of Jesus in the New Testament, to identify and release our “baggage” of imperialism and materialism, in hopes we can discover a radical, new outworking of the gospel. Throughout his gritty critique, there are smatterings of hope and joy, attentiveness to the Holy Spirit, and a deep love and commitment to Jesus.

The Unkingdom of God helped me see Christianity in North America, as well as global mission efforts, through a different lens than I usually use. My thinking has been sharpened. My desire to live and serve as Jesus wants has been invigorated. For these things I am thankful.

—John Best serves as a Mission Mobilizer with MB Mission. He and his family live in Abbotsford, B.C. and are part of the South Abbotsford Church community.

Christian giving is about the giver

God’s witnesses to the ends of the earth

Four-foot-tall guides to the heart of God