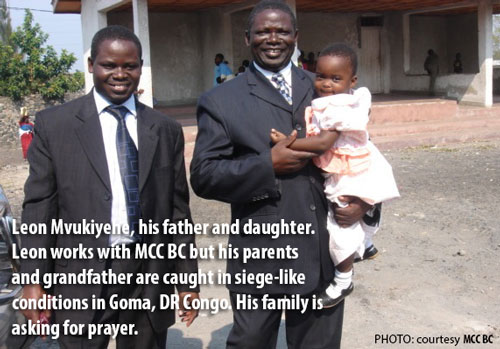 Leon Mvukiyehe is a man of prayer. It’s the only tool he has as he considers the plight of his family who are caught in the conflict that has arisen in Goma, Democratic Republic of Congo. His father has been sick for some time. In addition, Mvukiyehe, who works for Mennonite Central Committee B.C., says his parents are also caring for his elderly grandfather, so they have been unable to flee.

“Aside from praying for my family and all those affected by the current situation there, there is not much else I can do,” he says, but adds that this is exactly what his parents are asking for. “Every time when I talk to my mom, dad and my other siblings, we encourage all of us to pray for one another and to stay connected with God through prayers.”

MCC staff are also in prayer and are deeply concerned about the rapidly growing numbers of internally displaced people (IDP) in eastern Congo, due to intensified fighting in North Kivu Province.

Already burdened by more than 1.5 million IDPs, eastern Congo is now reeling as this most recent round of military activity is forcing another 250,000 people out of their villages or IDP camps and destabilizing life for the 700,000 residents of the provincial capital of Goma, many of whom are fleeing to Rwanda or south into South Kivu Province.

In the past week, Goma has become the focus of major fighting between a rebel military group and DR Congo national troops. Electricity and water supplies to the city have been disconnected. Mvukiyehe’s parents have been living in a situation of siege ever since. His father’s failing health requires him to meet with his doctor weekly but that is now impossible. In the brief moments when they’ve been able to leave their house in search for food, they have found that there is little available. Banks, hospitals, and businesses remain closed.

MCC is responding together with its long-time partner, the Church of Christ in Congo (ECC), providing food and humanitarian aid to IDPs. In this past year, MCC has also supported peace and reconciliation projects and is supplying food, seeds and tools for returning IDP’s utilizing funds from a Canadian Foodgrains Bank grant.

To this, Mvukiyehe and his family add their fervent prayers and stand firm in their Christian faith.

“My family and I serve a living God. He has done many things in our lives and he still continues to,” he says, inviting others to pray with him for peace in DR Congo and elsewhere. “Please continue to pray for people in Congo, in the Middle East and elsewhere in the world who are going through hard times. May God richly bless you all.”