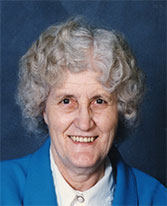 Tena lost one brother to drowning and another died in infancy. She worked in the Menno and Cottage hospitals, Abbotsford, B.C., as a care aide. Tena and George were married 16 years,and worked as gardeners for Block Brothers Recreation Ranch, 100 Mile House, B.C.. After George’s sudden death in March 1990, Tena married George’s brother Peter, June 1990. They lived in Abbotsford, B.C. When Peter died in 1999, Tena’s life was already affected by Alzheimer’s disease. She was mobile and communicative when she moved into Tabor Home in October 1999. She lived her final 13 years in a nursing home, for the last 7, requiring total care.