What's New
MWC Assembly small but full of joy
Bad back doesn’t hold back MDS volunteer
Transition in CCMBC National Faith and Life Leadership
Leading through the trauma of covid: Part three...
The church distracted: When the main thing is...
Remote wilderness rescue turns into service with MDS...
How open is your mind?
Following Jesus together across barriers
2022 National Faith & Life report to the...
CCMBC 2022 national assembly summary
Home Katherine Elsie Martens 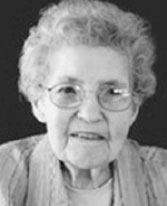 Every evening, Katherine’s family would sing to her father’s guitar. Her grandmother died of typhus that swept through the village with Makhno’s army. During the famine, when the family was finally cleared to immigrate, Katherine’s father, a butcher, died of an infected wound. In 1924, they took a cattle car to Riga, Latvia, where their stepmother was detained for trachoma, and wasn’t heard from again. Katherine and her sisters immigrated to Herbert, Sask., where they were separated. Katherine was adopted by Peter and Maria Goertzen in Herbert, Sask. She wanted to nurse, but there was no money for training. She and Jacob farmed near Herbert. After he died of cancer, Katherine sold the farm and managed the MCC store for 10 years. In her 80s, she sewed hundreds of blankets for MCC and made sure each grandchild had a blue jean picnic blanket. Although Katherine’s early life weakened her self-confidence, she pushed herself to face new experiences, including performing a rap with her teenaged grandchildren, and at 75, sitting on the fridge to hang wallpaper. A forward thinker, she enjoyed new worship music. Katherine was an avid reader and a great storyteller.