What's New
A matter of love: Reframing abortion
“Any chance you might be expecting a goldfish?”
Abortion, the image of God, and faithful witness...
Choosing motherhood: The sacrifice of honouring life
MWC Assembly small but full of joy
Bad back doesn’t hold back MDS volunteer
Transition in CCMBC National Faith and Life Leadership
Leading through the trauma of covid: Part three...
The church distracted: When the main thing is...
Remote wilderness rescue turns into service with MDS...
Home John Henry Neufeld 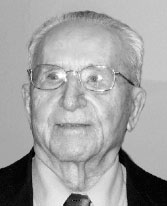 John immigrated to Canada at 13, settling in Holmfield, Man. At 18, he moved to southern Alberta, where he worked as a farmer and married. In the 1940s, he moved his young family to Edmonton, where he was a truck driver and school custodian. In 1965, they moved to the Fraser Valley, B.C., to resume farming. John was active in church leadership in Edmonton, serving as moderator. He helped launch Lendrum (Alta.) MB Church. In addition to grieving 2 wives, John mourned his infant daughter Elfriede (1942) and 6-year-old son Elmer (1951). Despite hardship, he was a man of deep faith. John is remembered as a hard worker and gentle man dedicated to his family.