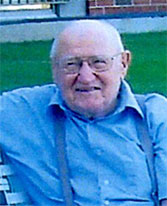 Orphaned at 7, Jacob clung to oldest brother Johan as they fled Russia through China to Paraguay. In China, at 10 or 11, he worked in a restaurant to feed his siblings. In Paraguay, Jacob and Maria Wiens treated him like a son. At 16, Jacob became an apprentice in woodworking and a lifelong accomplished craftsman. Jacobs’ life was never easy, but he inherited his father’s jovial nature. He accepted Christ, found solace in the Lord, was baptized, and became active in his church’s youth group. In 1958, Jacob and Lena immigrated to Canada, settling in St. Catharines, Ont. Here Jacob, with son Rudy, went into finish carpentry. He spoke often of his desire that all his family develop a personal relationship with Christ. Jacob and Lena were kindred spirits for 73 years.