What's New
A FOCUS on Mission
Must Patience Be So Slow?
Harold Jantz: A Heart for the Mennonite Story
Lorlie Barkman: A Life of Creative Engagement
Last Days, First Days
Women in Ministry: Bertha Dyck
January Moment in Prayer “Holy Spirit—Fill Us!”
The Church as the Patient Body of Christ
Advent: Making Much of Jesus: Christmas Day
Advent: Making Much of Jesus: Fourth Advent
Home Irene Rennert 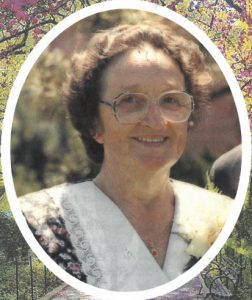 In 1932, Irene’s family moved to Nikopol, where Irene became a Christian. Shortly afterward, they were separated from her father, whom they never saw again. In 1943, following the retreat of the Germans, the family fled to Germany via Poland. They immigrated to Paraguay in 1948. Irene attended Bible school and studied nursing. Irene and Walter were missionaries to the Nivaclé people. They immigrated to Canada in 1967. Irene worked as a nursing aid for a German care home in Vancouver and ran her own home business. She enjoyed cooking meals for her growing family. In Abbotsford, Irene devoted her time to knitting for humanitarian causes and gardening. After her first stroke in 2011, she lived at Menno Home for 5 years. Never idle, Irene’s hands were dedicated to blessing others.