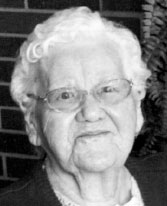 Helena trained as a teacher in Ukraine until civil unrest ended her studies. She and John married in 1938 and moved to Neuhorst, Ukraine, where he taught until he was conscripted into the Russian army and later banned. He was lost in Siberia shortly after 1940, leaving Helena with their first child. Helena moved in with her mother and became baptized. They fled through Poland to Germany in 1943, and on to Paraguay in 1950. Here, Helena married widowed brother-in-law Jacob in 1951. In 1955, Helena and Jacob immigrated to Canada, settling in Vineland, Ont., and later in St. Catharines, Ont. After years working on the farm and at the canning factory, they spend another 9 happy years together at Tabor Manor. Helena was thankful for God’s gracious leading.