What's New
Abortion, the image of God, and faithful witness...
Choosing motherhood: The sacrifice of honouring life
MWC Assembly small but full of joy
Bad back doesn’t hold back MDS volunteer
Transition in CCMBC National Faith and Life Leadership
Leading through the trauma of covid: Part three...
The church distracted: When the main thing is...
Remote wilderness rescue turns into service with MDS...
How open is your mind?
Following Jesus together across barriers
Home Gustav Gauer 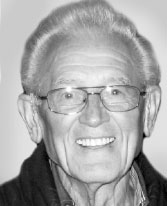 Due to WW II, Gus’s family was forced to move to German-occupied Poland. During their winter 1940 trek, his father died. A year later, at 14, Gus was drafted into military training, and in 1943, was enlisted into an anti-aircraft unit in Munich. In a 1945 counterattack in Belgium, Gus suffered a leg injury, and nearly died. He was transported from hospital to the first of 20 prisoner of war camps over 3 years. He narrowly escaped a cave-in in a copper mine. During his recovery, May 1949, Gus fled East Germany to reunite with his family in Hamburg. Here, Gus worked at a shoe factory, apprenticed as a photo engraver. He decided to follow Jesus and joined the Mennonite church, where he met Magdalena. After surviving 3 hurricanes at sea, Gus and Magdalena arrived in Canada in 1951. In Vancouver, Gus worked as a carpenter, and then as superintendent for Stanzl Construction for 20 years. He served Willingdon Church, Burnaby, B.C., as elder, home group leader, Sunday school teacher, and morning prayer leader. Gus and Magdalena’s home was a haven for many. After retiring in 1982, Gus spent 2 years as a visiting pastor in Salzburg, Austria. He served 5 years in full-time pastoral care and visitation at Willingdon Church. Gus and Magdalena were interim pastors for 4 months in Bad Reichenhall, Germany, 1996–1997. They moved to Abbotsford, B.C., in 1990. Beginning in 1996, Gus led hundreds to Christ on trips to Ukraine, and started a church in his hometown of Sniatyn, Poland. Gus helped construct churches, Stillwood Camp, and his children’s homes. He will be remembered for the sparkle in his eyes.