What's New
“Any chance you might be expecting a goldfish?”
Abortion, the image of God, and faithful witness...
Choosing motherhood: The sacrifice of honouring life
MWC Assembly small but full of joy
Bad back doesn’t hold back MDS volunteer
Transition in CCMBC National Faith and Life Leadership
Leading through the trauma of covid: Part three...
The church distracted: When the main thing is...
Remote wilderness rescue turns into service with MDS...
How open is your mind?
Home Arthur Reimer 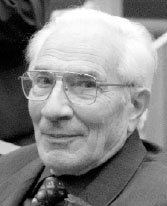 In 1926, Arthur’s family immigrated to Canada, settling in Eastend, Sask., and later moving to Vauxhall, Alta. When Arthur was a young adult in CO camp, his family moved to Chilliwack, B.C. He attended Bible school in Chilliwack and Yarrow, B.C. While decorating the car at his brother’s wedding, Arthur met Helen. They married a couple years later during a snowstorm. Music was a big part of life: they sang in care homes with their daughters, and later, with the senoirs’ choir. Arthur was encouraged by God’s promises. His quiet kindness, prayers, and the twinkle in his eye testified to the love of his Redeemer.