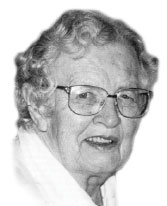 Agnes’ family immigrated to Canada in 1924, settling in New Hamburg, Ont., and moving to Coaldale, Alta., 2 years later. Agnes worked as a domestic in Lethbridge, Alta., then enrolled in 1 year of high school, followed by normal school in Calgary. She taught in rural southern Alberta 2 years. Agnes and Jacob farmed near Coaldale. Their eldest son drowned in a hunting accident, leaving a wife and infant. After Jacob’s death, Agnes sold the farm and moved into Coaldale. In her retirement, Agnes joined singing groups that served in institutions, taught Sunday school, and served church committees. She was late for her 80th birthday party because she was delivering Meals on Wheels. With her friendly and gentle disposition, and deep faith in God’s goodness, Agnes brought joy to all who knew her. Even as her health declined, her most often heard comment was “I have nothing to complain about.”