What's New
A FOCUS on Mission
Must Patience Be So Slow?
Harold Jantz: A Heart for the Mennonite Story
Lorlie Barkman: A Life of Creative Engagement
Last Days, First Days
Women in Ministry: Bertha Dyck
January Moment in Prayer “Holy Spirit—Fill Us!”
The Church as the Patient Body of Christ
Advent: Making Much of Jesus: Christmas Day
Advent: Making Much of Jesus: Fourth Advent
Home ViewsFrom the community My courageous mother 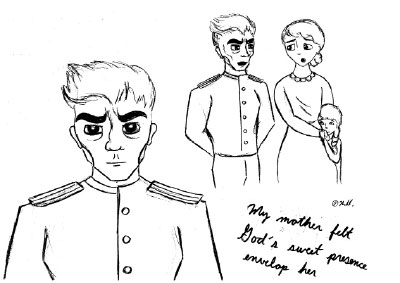 My German Baptist mother from Volhynia, Ukraine, was a strong woman, a woman of great faith and a compelling storyteller. Of the many stories she shared with me before her death in 1990, this one impacted me the most.

Between 1937 and 1939, thousands of Christians in Ukraine were deported to Siberia on trumped-up charges or simply killed.

My mother was a young widow with a little girl to raise and an elderly aunt to support. Toiling on a kolkhoz (collective farm) in Dnepropetrovsk, hundreds of miles away from extended family, my mother worked very hard and tried to be as unobtrusive as possible.

However, one evening, there was a loud knock on the door. Standing on her doorstep was the kolkhoz commandant. One question followed another until he came to the one she had been dreading: “Do you have a religious faith?”

My mother was prepared to say no. God would understand: she wasn’t really denying him; she needed to protect her daughter and aunt.

Yet, in spite of her intention, the words came out: “Yes, I’m a believer!” She was shaking like a leaf, yet my mother felt God’s sweet presence envelop her.

The commandant shook his finger: “You have two strikes against you: you’re German, and you’re a believer.” He put his questionnaire away. “If you weren’t such a conscientious, hard worker, you would disappear.” And he walked away.

This story reminds me that “He is risen, indeed” and lives to make intercession for us. As friends in Ukraine fear a return to those dark times today, I am grateful that Jesus gives us courage and faith to be strong in tough times.

—Lilli Kehler is from Abbotsford, B.C.