A half-decade ago, people were touched by the story of a B.C. board of seven elders who dug deep into their own resources to start a church building fund. These seven felt it was time to stop renting, and build a church to reach a newly developed residential district. They pledged $330,000 to start, and the congregation made up the rest, for a $500,000 beginning. The church was Hyde Creek Community (MB) in Port Coquitlam, B.C. (Metro Vancouver).

Six and a half years later, Hyde Creek finally has its own building. A special celebration, coinciding with Thanksgiving, marked the end of an odyssey of engineering studies, paperwork, negotiations with many levels of government, and ultimately, an actual purchase agreement that provided the church building they had been using as renters. 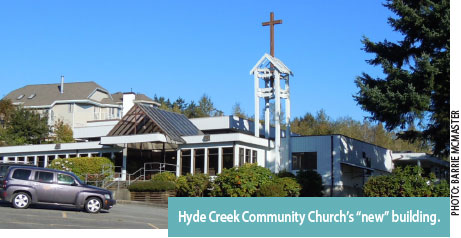 Oct. 6, 2012, Hyde Creek gave thanks it now owns its building (complete with mortgage). “It has been a journey,” says lead pastor Ken Braun, “and we are thankful it’s concluded so well.” Hyde Creek purchased the church building from the North American Baptist Conference after the Mary Hill Baptist congregation, which previously owned it, disbanded. Some of Mary Hill’s former members have stayed on as part of the MB congregation.

Taking over ownership of their current meeting space isn’t what Hyde Creek imagined in 2006, when their vision was to build near new residential developments on Coquitlam’s Burke Mountain. Part of the $500,000 seed money had paid for studies on a piece of land they had purchased: engineering reports, surveys, permit applications, and consultants’ advice, in order to follow proper processes to redirect a creek on the property. During the Thanksgiving service, members recalled the daunting and seemingly endless six years. Just when it finally appeared all the effort was worth it, a government branch refused their request to build, on environmental grounds.

CCMBC stewardship representative Al Thiessen commented on how hard Hyde Creek leadership had worked to realize their vision on Burke Mountain. “Then they had to work through the death of a vision,” he said, “and work with God on a new one.”

The death of the original vision was one hard reality. The second was financial. During those years of waiting and preparation, the church had followed consultants’ advice and spent tens of thousands of dollars, now apparently lost to them. Should they try to recover it? After a period of soul-searching prayer, the church concluded it was indeed a real loss; Hyde Creek had done the right things throughout, and now deserved restitution of its funds. So the church sued.

The lawsuit went to mediation and the church settled for “part of what we lost,” says Braun. The legal part is behind them now.

Braun says through all of the trials, both the B.C. conference leadership (BCMB) and CCMBC were amazing in their help, advice, and – as needed – funding support. He especially mentions BCMB director of administration Marilyn Hiebert, who was “just fantastic.”

Those supporters were present Oct. 6 to pay tribute to Hyde Creek. Hiebert mentioned the congregation’s “can do” attitude and faithfulness in holding its vision to reach out to its neighbours. She said, “Your obedience to the call of God has not been abandoned. It just changed its address.” Citing Ephesians 2:21–22, she added, “It’s the people that are the holy place.”

Al Thiessen quipped, “You don’t need a building, but having one sure helps.” He told the congregation, “God has you here for a reason. Go find out what that is. Then go do it.”

BCMB conference minister Rob Thiessen said now the legal struggles are behind them, members can act on the new vision. “This is the starting place,” he said. God gives us the privilege of partnering with him, being used by him, and sacrificing ourselves for his kingdom purposes.

“God is going to open doors,” said Rob Thiessen, “and you will see lives change. Count this a privilege.”

The morning concluded with communion. After the benediction, Braun invited people to stay for coffee and a celebration cake, commenting, “We’re home now.”