What's New
Through the conflict, life carries on in Ukraine
A FOCUS on Mission
Must Patience Be So Slow?
Harold Jantz: A Heart for the Mennonite Story
Lorlie Barkman: A Life of Creative Engagement
Last Days, First Days
Women in Ministry: Bertha Dyck
January Moment in Prayer “Holy Spirit—Fill Us!”
The Church as the Patient Body of Christ
Advent: Making Much of Jesus: Christmas Day
Home News Graduation held in hospice 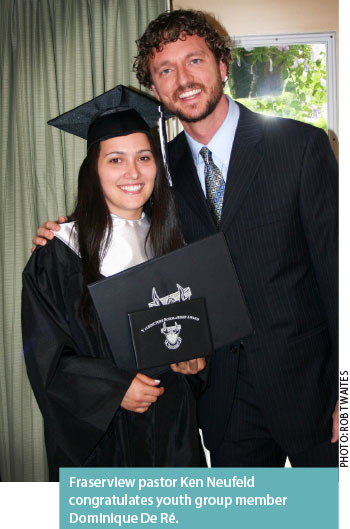 David De Ré’s last wish was to attend his daughter Dominique’s high school graduation. So when, a week before the ceremony, his cancer took a turn for the worse, Fraserview (MB) Church, Richmond, B.C., brought her grad to him.

“David had promised he would still be here to witness her grad,” says Unrau. “We needed to help him with that promise and make sure Dominique experienced having her father at her grad.”

The 52-year-old didn’t open his eyes, but responded with sounds and squeezed his girls’ hands, recalls Neufeld. “You could tell he was taking in what was going on.”

Having served on H.J. Cambie Secondary School’s parent advisory council, David had a strong relationship with Wiens, who took his hand and bent close to sing his daughter’s praises.

After a shortened version of his speech celebrating the class’ accomplishments, Wiens gave a cap-and-gown-clad Dominique her diploma and a $400 scholarship from “The Fridge,” Fraserview’s youth program, thanking her for years of service in the kids’ club, youth group, and teen drop-in.

In addition to leading a class of Grade 3–5 girls, and helping with games, set-up, and clean-up, Neufeld says, “Dominique built relationships with other neighbourhood teens to help connect them to the church community.”

Dominique wants to be an elementary school teacher, and “David’s concern was that his kids would have enough money to go to college,” says Neufeld. M.A.G.I.C. (Memories Are Gifts In Children), a charity that grants dying parents’ wishes, awarded Dominique and Danielle (entering Grade 12) each $1,000 toward post-secondary education.

Some 20 of Dominique’s family, friends, and fellow grads, unable to fit in David’s room, gathered afterward to share over refreshments Alblas had arranged.

David died a few short hours later.“I was really glad my dad was able to see me graduate, that he could be there for that,” says Dominique.

This gift to a dying man and his grieving daughter grew out of Fraserview’s decade-ago shift toward welcoming people to belong before they believe. “We resolved to serve our community whether people were committed to our faith or not,” says Unrau. “That opened our doors and our hearts, and in turn, opened the surrounding community to us and to Christ.”