What's New
6 reasons to attend the MWC Global Assembly...
One too many
Just one more
A safe place in Winnipleg
When the sent are sent away
Leading through the trauma of covid: part one...
Church of Lithuania supports Ukraine Christians
A mennonite heart for refugees
A great time for building relationships
Multiply announces new General Director
Home MB HeraldHomepage “Give us today our daily bread…”

“Give us today our daily bread…” 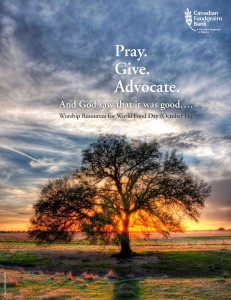 World Food Day was founded by the Food and Agricultural Organization (FAO) of the United Nations in Quebec City in 1945 to raise awareness about hunger.

According to the FAO, some 852 million people in developing countries (14.9 percent of the population) were undernourished in 2010–2012.

Food insecurity – insufficient access to safe and nutritious food that meets dietary needs for a healthy life – also exists in Canada, affecting 1 in 8 households. Nunavut has the highest rate (36 percent of households) of food insecurity. In general, Canadians are most likely to experience food insecurity in households including children under 18, headed by a lone woman.

The Canadian Foodgrains Bank – a Christian response to hunger – provides a worship resource for World Food Day including prayers, songs, and a children’s feature. Download from foodgrainsbank.ca.