What's New
Abortion, the image of God, and faithful witness...
Choosing motherhood: The sacrifice of honouring life
MWC Assembly small but full of joy
Bad back doesn’t hold back MDS volunteer
Transition in CCMBC National Faith and Life Leadership
Leading through the trauma of covid: Part three...
The church distracted: When the main thing is...
Remote wilderness rescue turns into service with MDS...
How open is your mind?
Following Jesus together across barriers
Home Life & Faithfeature articles From Front Porches to the Ends of the Earth

From Front Porches to the Ends of the Earth 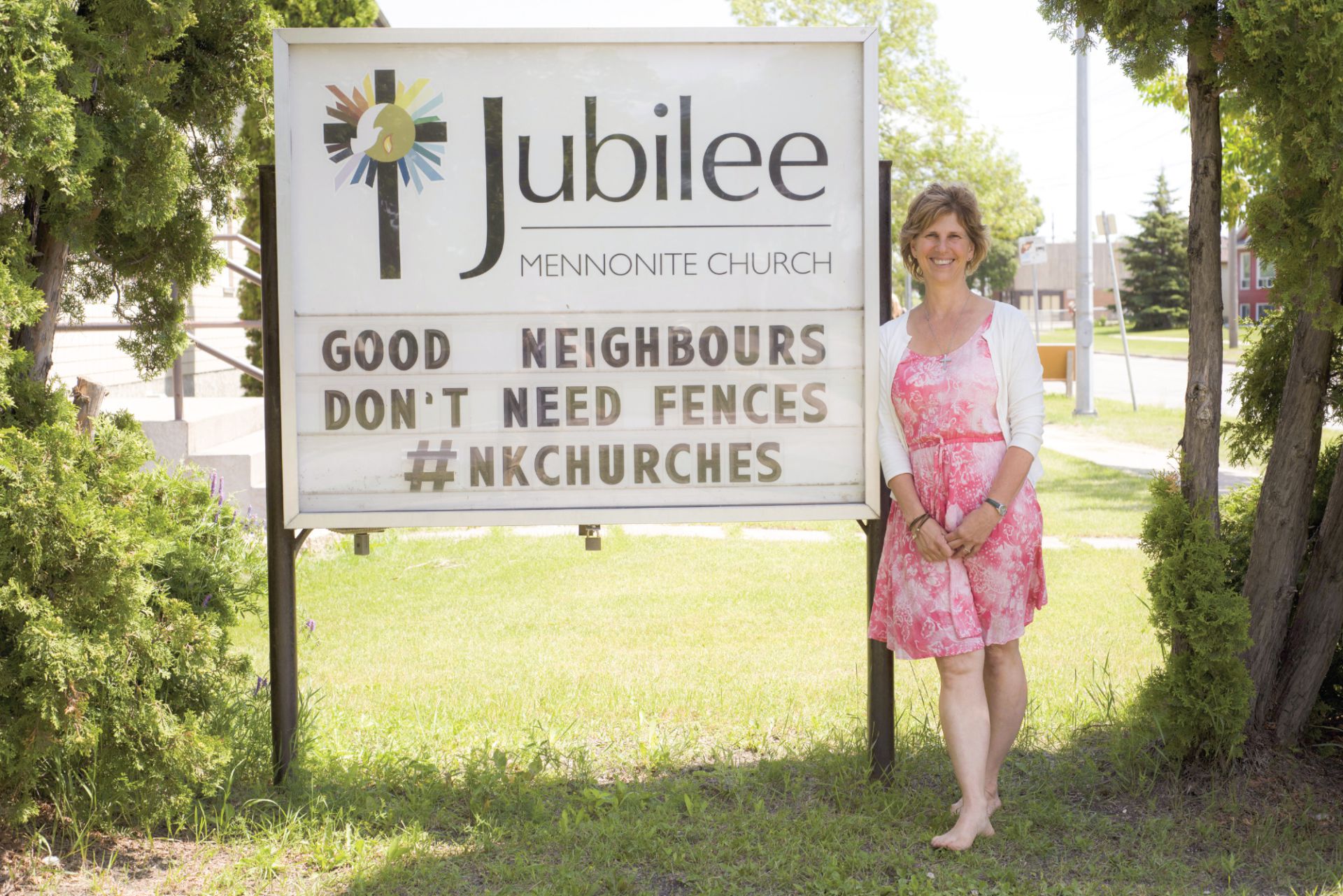 “When I heard that, I thought, Jesus is telling us to do this and we’re falling short. So how can we make this a reality in our city?”

Jubilee is one of nine churches (including McIvor Avenue MB, North Kildonan MB and River East MB) in Winnipeg’s North Kildonan neighbourhood that made headlines for uniting to perfect the art of neighbouring.

Geddert cites numerous reasons that neighbours have lost touch: the loss of corner shops has made it less convenient to walk places. The prevalence of air conditioning and social media has made it more comfortable to stay indoors.

“Also, we have more fear in our world today,” says Geddert. “I got a call to do canvassing; the charity said they were having a hard time because people are too scared to go door to door.”

“I remember sitting on my front porch 30 years ago and watching tons of children playing and people walking and interacting with their neighbours,” says Geddert. “Now, we have remote controls for our garages: we open the door, go in and we don’t have to see anybody else.”

From Denver to Winnipeg

The Art of Neighboring movement started six years ago, when 20 Denver pastors asked the mayor, How can we, as churches, best work together to serve our city? The mayor said, If we could just figure out a way to be great neighbours.

The pastors thought: The mayor just invited a room full of pastors to get their people to actually obey Jesus’ command to love your neighbour as yourself.

A year ago, Geddert returned from an Art of Neighboring conference (led by Denver pastor Dave Runyan), inspired to talk to her local hub of pastors about upping the neighbourliness in their community. All nine churches committed to doing a three-week sermon series on neighbouring.

They also posted the same messages on their church signs and used the hashtag #nkchurches on their Facebook posts. “We went in with a playful, experimental attitude,” says Douglas Mennonite pastor Adam Robinson. “We were curious whether people would pick up on the fact that something larger was connecting churches on the block.”

Geddert recalls passersby saying, “I thought it was weird: I was driving around and saw the same sign at a United, then a Mennonite, then a Catholic church!”

But before preaching neighbourliness to their congregations, the pastors started in their own backyards. Using the block map from Dave Runyon and Jay Pathak’s Art of Neighboring book and website, North Kildonan pastors committed to learning their neighbours’ names.

From target audience to real people

“Love plays out with people who have names, faces and stories,” says Denver Wilson, McIvor Avenue MB pastor of discipleship, whose family sent an open invitation to their neighbours to join them for dinner in the park every Sunday evening last summer.

“Sometimes in church ministry, we can develop target audiences or think about people who are more hypotheticals and just beyond our grasp,” says Wilson. “But God places us around real people. That’s where we learn how to love.”

Geddert says, “We’ve moved our fire pit into our front yard, and I’ve put toys in our front yard to invite people into our space. When we have marshmallow roasts and children walk by, we invite them to join us.”

One Jubilee member delivered cookies. Another worked on his car in the driveway instead of in the garage, so that his neighbours would stop to ask him what was wrong with his car. It could be as simple as lifting your head and saying hi when you walk by, says Geddert.

From one street to whole cities

When an REMB member said, “This year, my wife and I are having a meet and greet for our neighbours in July,” Isaak asked, “Oh, when do you usually do your meet and greet?” He laughed and said, “We’ve lived in our neighbourhood for 30 years, and we’ve never done this; it’s because of the sermon series.” 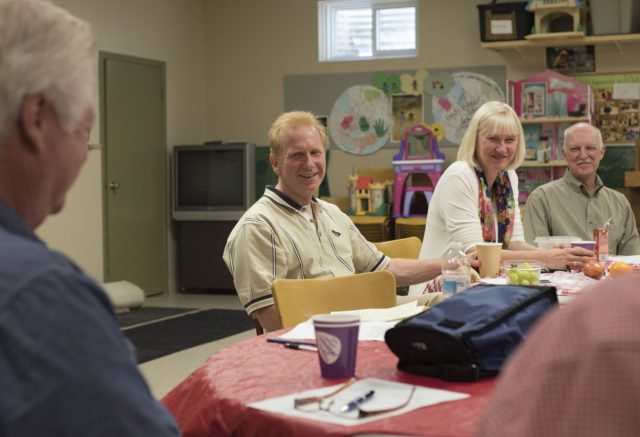 “I’ve noticed more people in our congregation asking for prayer for their relationships with their neighbours,” says Geddert.

Her hope is that churches will go beyond homes to engaging local schools, businesses and agencies with the question, “What does it mean to be a good neighbour?” In speaking to government staff, Geddert has met many fellow Jesus followers eager to come alongside Jubilee’s community-building efforts because “If we’re good neighbours, good things will happen to our city.”

From a neighbour to one of the family

Jubilee’s experience of the Art of Neighboring sermon series was “exciting because we baptized three people from the neighbourhood who had no experience with what it is to know Jesus,” says Geddert.

“It was so moving to hear their stories about feeling like they finally have a family,” says Geddert. “In that process, transformation happened.”

One of the baptismal candidates, Faith, began coming to Jubilee’s community kitchen two years ago. “There’s a peaceful feeling when you walk in,” she says. “You know you’re with God and people who care.”

At Jubilee, Faith volunteers for the children’s drop-in, contributes to Bible studies, women’s services and the community garden and chairs the Manitoba Housing Tenant Advisory Committee that meets in the church.

“I walk over every day to talk to Anna Marie; this is our second home,” says the single mother of three. “If you’re going through struggles, you can come for support; if good things are happening, they celebrate with you.”

Among their neighbours at the four Manitoba Housing Complexes across the street, Jubilee has lost friends to suicide, walked alongside people returning to addictive behaviours and sat with parents whose children were just removed by family services.

“Neighbouring is sometimes so joyful and sometimes so discouraging,” says Geddert. “It’s listening to where the Spirit wants to take you.”

“It’s messy, but love is not about our preferences or drawing people around us who insulate us,” says Wilson. “It’s discovering love beyond our differences.”

Perfecting the art of neighbouring unveils “God’s masterpieces” (Ephesians 2:10). As Faith told Jubilee at her baptism, “I have new life because you loved me.”

Cultures and faiths meet around common cause

To make good use of earth and water, we planted a fig tree in our front yard, then raspberries, blueberries & huckleberries, garden boxes of vegetables and herbs. Then, right by the road, grapevines, rhubarb plants and strawberries. While we tend and weed, passersby stop and chat and taste. We found out, by happy chance, a way into neighborliness. Thank you for this story!

What an encouraging story. Then why do I feel convicted?

Here’s a great article that exposes what our busy lives has forced us to overlook. I’m not informed at this point to say what portion of our population cares about how we do community or “neighboring” but I’ll guess that fewer and fewer people and families live in a rural setting were quality neighboring means the difference between surviving and thriving or perhaps sadly, none of these, let alone communicating our faith. In other words, you don’t know what you have until it’s gone, ie. relationships and front porch friends.